(UPDATED, see below the fold) On Wednesday’s open thread, DB posted a tweet from BBC journalist, Jude Machin, expressing her hope to wake up in the middle of the night to watch her beloved Obamessiah debate His enemy for the first time. The point DB was making is best expressed visually, so I’ll reproduce it here:

I’m going to set my alarm for 2am to watch the Presidential #debate on BBC News. I am. Honestly.

UPDATE: As you can see above, someone has forced a little impartiality on Jude after all. Awww. I’m currently having difficulty uploading the screenshot I took at the time, but fortunately DB took one and posted it in the comments below.

(UPDATE to above UPDATE: The above update was written after Machin changed the pic to one of herself holding what appeared to be an Olympic torch, but before the entire Twitter account was killed. I was referring here to the new profile avatar.)

Jude has gone all out in her devotion, it seems. So much for not doing anything stupid, eh, Ms. Boaden? Naturally, a fellow worshiper chimed in with an “Amen, sister!”

…prompting a response from the erstwhile “Obamamama”:

@leahgooding I am not very impartial when it comes to US politics! x

They’re all at it, and they don’t care about showing it in public. Ms. Gooding doesn’t have the requisite “views my own” get-out-of-bias free card that most of them do, but neither does she have the BBC logo. So she’s probably beyond the reach of the BBC guidelines.

Are these tweets proof of biased reporting/presenting on their own? No. But added all up, they create a profile of the very kind of echo chamber fellow Left-leaning BBC journalist, Kate Dailey, was warning against only yesterday. It has to affect BBC reporting on some level. If they all share the same approved thoughts anyway, it will happen naturally, without conspiracy or awareness.

Time for some more social media training courses, I think. Somebody should ask Helen Boaden if this is the kind of thing she was talking about when she asked staff to engage the brain before “rushing to communicate“.

UPDATE AGAIN: Below are the screenshots. I’ve left the above embeds as is, in order to show that Machin’s Twitter account has been sent down the memory hole. That’s why there’s no more profile pic. It’s possible she killed it once I told them I had screenshots. Another round of training is in order, I should think. At your expense. 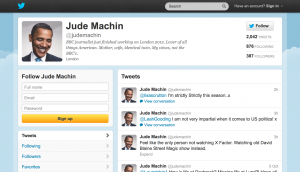 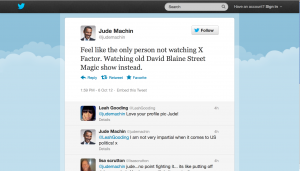