This morning’s BBC news is making much play with a letter in the Times denouncing those who appropriate icons of British military history for political purposes. It was one of the lead items on R4 news.

Two former heads of the Army are among those to put their names to a letter accusing “those who seek to hijack the good name of Britain’s military”.

It does not name the BNP but has been issued as part of a new campaign.

They write: “We call on all those who seek to hijack the good name of Britain’s military for their own advantage to cease and desist.

“The values of these extremists – many of whom are essentially racist – are fundamentally at odds with the values of the modern British military, such as tolerance and fairness.”

Well, I’m sure you can’t expect the (former) Army top brass to keep copies of everyone’s election leaflets – but surely the BBC’s army of newshounds and political correspondents must have noticed that the 2009 Euro elections featured an awful lot of what you could loosely call ‘nationalist’ iconography which didn’t come from the party not named by the generals. Try this, spotted by Iain Dale.

OK, why haven’t the BBC spotted this leaflet, handed out in the West Midlands Euro constituency in 2009 – by an ‘essentially racist’ party ? I noted it at the time as the Battle of the Spitfires.

Surely, as the generals have not named any political party, but purely those “who seek to hijack the good name of Britain’s military for their own advantage” , the BBC piece should include the Labour Party in its list of suspects ? Where’s that balance I keep hearing about ?

I caught the commentary on The World At One. The report included the returning officer reading the results for the Labour Party, Liberal Democrat Party, Green Party, Conservative Party and …. no, that was it.

As a listener, I got the impression the Greens came fourth. No mention of UKIP beating the Greens in to fifth place (and coming pretty close to the Lib Dems).

This was backed up by a comment from GCooper who said:

JeffD’s report was more or less the same as the one on the BBC R4 6pm news roundup I listened to a few minutes ago.

With one exception. The announcer said ‘….Labour were beaten into second place, ahead of the Lib Dems and the Greens…”
Used as I am to the shocking political bias routinely displayed by the BBC, even I was poleaxed by that.

I was just listening to the BBC coverage of the Norwich by-election on Radio 4. The reporter was talking about Labour holding on to second place, “ahead of the LibDems and the Greens”.

The problem with this is that UKIP were in fourth place, 600 votes ahead of the Greens.

Can’t mention UKIP on primetime, can we?

Update on July 24, 2009 by Bishop Hill
I notice that UKIP are complaining that the BBC froze them out in favour of the Greens during the run up to the election too. There’s a clear pattern emerging isn’t there?

An interesting couple of links for you: Iain Dale doesn’t mention the BBC but says
“The value of the Pound is about to become the big story in town. And if not, why not?”

John Redwood meanwhile, names and shames the BBC as the culprit behind the non-story. He says the BBC are misrepresenting the credit-crunch to present the situation in Britain as having nothing to do with domestic factors (aka the lengthy incumbency in Downing Street of one Gordon Brown). 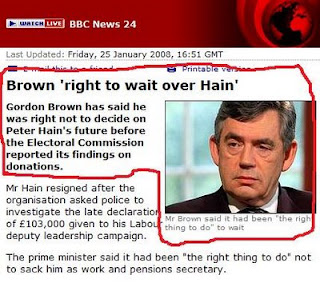 Man in a Shed highlights this instance of BBC covering for Gordon in the light of the Hain fiasco. The word “right” is used four times in the opening to the article (including in the photo caption).

This is the kind of knee-jerk support we can expect from the BBC newsrooms. The subliminal dimension of this is underlined by the fact that a search of the BBC website, focussing on News and Sport, cannot locate this article using the exact headline under which it ran- see here.

It’s worth pointing out here that the BBC website search tool is truly the creature of the BBC, aimed at preserving the BBC’s chosen face rather than archiving its content.

What the search did bring up was this article. What is interesting in a way is not the article as much as the way it is described in the “archive” (for want of a better word). Despite the word not being used in the main article, the archive tells how “Peter Hain is taunted by Tories”. The article itself is very loaded, with the nasty Tories to the fore- putting Mr Hain “on the rack” and “under fire” and needing to be warned by the Speaker etc etc. All over “incompetence”, we are told. Needless to say, the matter was not considered only one of incompetence, otherwise Hain would still be in position (according to the statements of Gordon Brown) rather than preparing to face his police investigation. Nice covering Beeb! Somehow it seems to me if they could stop the legal processes taking place in this case, they would, and if they can spike them in any way, they will.

I’ve just heard the BBC anchor respond “absolutely” to a Labour talking head’s suggestion that we need to remember Peter Hain’s “great achievements” as Work and Pensions Secretary. I am sure this is not an isolated incident of BBC sympathy. Would you care to add your thoughts in this thread? BBC story and coverage HERE.

Oh, and of course, this blog offers kudos to Guido on his great success.

John Redwood offers an account of trying to get the BBC to cover a point of view they don’t like. He is grateful that finally some of the BBC’s less central programmes gave him the chance to convey his view on the subject of what should be done with Northern Rock. We can see that he has been successful, but nevertheless was shunted off by the BBC from their “daily bread” programming to their less prestigious and more niche programming because, they said, “nationalisation was the likely outcome.”

Well, what do you know? There’s a crisis in Burma. To whom can we turn? Someone brave, strong, fresh, a man of influence, buoyed by popular mandate.

Er, no. I mention this because it is highlighted as the number one story on the BBC World News website at present. It’s the same sort of puffery they gave to Blair in his early days (years, in his case), where the British PM is seen being sought for his input by the great and good- and indeed is seen as the front man for the international community. The spin (yes, spin!) operation on Brown has been sickening enough, given the frankly old government trade that he is- the BBC seem to be losing no opportunity to cooperate in raising his profile on the world stage.

“Anyone who saw the gushing coverage afforded to the dour Scot’s speech at the Labour Party conference today might wonder if the BBC was the broadcasting arm of the Labour Party. There were several aspects about this coverage which caught my eye”

He also links to this article. News as nu-nu-Labour pabulum.

The close relationship between the BBC and the Government can be seen in this instance which the BBC has seen fit to report, which Tim Worstall has a laugh over.

Of course strictly I shouldn’t say between the BBC and “the Government”, but between the BBC and government generally. That the BBC was even running an online service “in support of the national curriculum” is something I would see problems with, though in fact it stemmed from the BBC’s Charter, which of course I also disapproved of. When can our children be free of this tedious integrated ideological training?

In addition we can see that the private sector suffers from the BBC’s interference- a lesson which ought to ring some bells all across media-land. That the EU intervened on this occasion- forcing a BBC re-think- is symptomatic of their assumed right to say that one country’s statism may not be their kind of statism. It is not at all indicative that the BBC has to regard the EU as a threat rather than an opportunity.

The relevance to bias here? Do we need one? Well, if so, it’s clear that an organisation whose raison d’etre depends on assisting public policy goals will be forever toeing the line on those goals. The fact that they agree with Nanny State almost goes without saying- Nanny is Aunty’s best friend.

Say I just want the news. Just say. What do I get from this headline that’s been sitting on BBC world news website all night, and remains at the time of this posting?

I’m not going to regale you with the various forms that the BBC article on the local elections has taken through the night. After a long period of doing Labour’s damage limitation exercise for them (…not as bad as expected, holding up against the “Toriess” and the “Plaid”…) it’s taken a shape of more realism. But honestly, at no point was there not the situation that both Labour and the Lib Dems were losing numerically, while the Conservative Party were winning consistently. How we read the results is one thing. To turn them back to front a negation of the news.

There’s a remarkable slant now to the BBC’s coverage. The main report now has as its first paragraph this:

“Tony Blair has insisted Labour has a “good springboard” to win the next general election, despite suffering big losses in Scotland, England and Wales.”

When the results show this:

Something amiss in the BBC’s intro (and headline, still)? Well, how about a wee mention for the only party listed in positive figures, whose figures are very positive? Why the focus on lame duck Blair? (clearing the decks for Gordon, perhaps, using the available scapegoat).

The first mention of the Conservatives is also unbelievably offhand and almost oblique:

So, not even dignified by the term “leader”.

This has all the hallmarks of a mourning newsroom.

And that’s not bias, is it now?

Meanwhile, Iain Dale (and friends) reacts to the Beeb’s bias.