The Telegraph’s Toby Harnden has a good blogpost about the “unseemly rush to blame Sarah Palin, the Tea Party and Republicans for murder in Arizona”.

I noticed this eagerness to blame the Right, and Palin in particular, when reading some BBC twitterers last night.

BBC News strand editor Rachel Kennedy, whose opinionated tweets (highlighted here on Biased BBC) led Director of News Helen Boaden to issue a warning email to all BBC staff, continues to be unconcerned about impartiality. In Kennedy’s view the cross-hair imagery in a map of pro-Obamacare Democrats produced by Sarah Palin was of such significance to yesterday’s shootings that she hoped it would bring about Palin’s downfall:

As Toby Harnden points out “martial imagery is standard political fare” and has been used by the Democrats when targeting Republicans. Such details are of no concern to a Palin-hating BBC news editor, though. Is it any wonder that BBC news output is so aggressively negative towards Palin when its editors openly express a desire to see her done for? It would be nice to think that such views would “do for” Rachel Kennedy, but as she works at the BBC she will no doubt be lauded instead.

The cross-hair map attracted BBC reporter Nicola Pearson’s attention too. She was concerned that it wasn’t receiving enough attention, and evidently was also impressed with the thoughtful balanced opinions of Kevin Maguire:

BBC US correspondent Katie Connolly was another who was keen to get in a mention of the Tea Party:

For BBC Radio Shropshire’s painfully right-on Jim Hawkins the map was the thing, as it was for BBC Twitter instructor Sue Llewellyn:

(Incidentally, “fieldproducer” is Sky News’ Neal Mann who last week was warning other journalists not to jump to conclusions about the arrest of the landlord in the Joanna Yeates murder case. No such worries about wild speculation for British broadcast journalists when there’s Palin-bashin’ to be done.)

Unfortunately for all the BBC employees desperate to pin the blame on Palin and the evil American Right, Caitie Parker, a former school friend of the shooter, had been offering some insight into his past politics and strange beliefs: 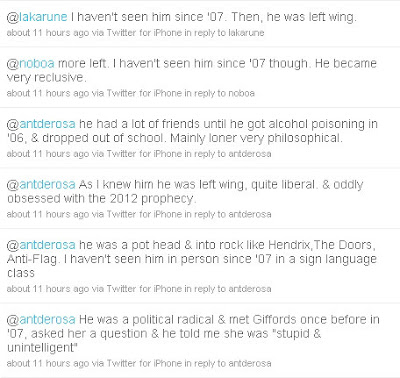 Doesn’t sound like he’d be a natural Palin-loving Tea Party supporter, does it?

It’s also worth noting that none of the BBC twitterers quoted above chose to mention that Giffords had enemies on the left, as this now-deleted blogpost at leftie website Daily Kos shows [click to enlarge]: 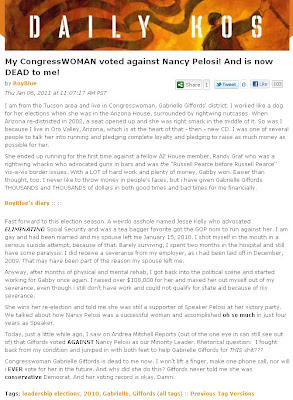 UPDATE 13.20. Gavin Esler has blessed us with his tuppence-worth this morning: 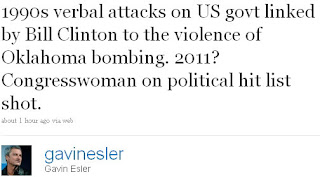 UPDATE 13.50. Remember how the BBC’s America editor rushed to inform us, incorrectly, that the Fort Hood shooter wasn’t motivated by religion? How very different from the BBC stampede to link yesterday’s sad events to Sarah Palin and the Tea Party.

UPDATE 14.45. A further thought. What does Rachel Kennedy’s Sarah Palin tweet say about Helen Boaden’s authority? The BBC’s Director of News pontificates about impartiality but her underlings continue to ignore her.

UPDATE 16.00. Another tweet from last night, this one from senior BBC journalist Toby Brown: