The BBC are worried about the Bradley effect.

The theory goes that some white voters tell opinion pollsters they will vote for a black candidate – but then, in the privacy of the polling booth, put their cross against a white candidate’s name.

And the fear among some supporters is that this could happen to Barack Obama on 4 November, when the country votes for its next president.

Now if it were true, it would indeed be sad. But what’s this ?

Other polls, meanwhile, suggest that white Americans have steadily become less reluctant to vote for a black person in the last few decades.

Brings a whole new meaning to ‘less reluctant’, doesn’t it ?

You could use the Gallup evidence to write a BBC piece suggesting that McCain is the victim of racism. I wouldn’t wait up for it though. 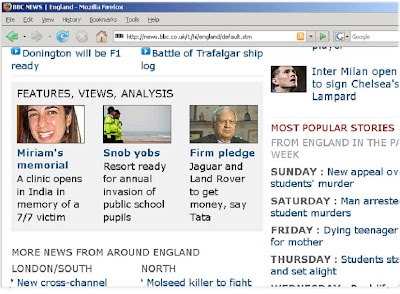 Can you imagine the BBC using such a perjorative headline in a story about any other group ?

Who says so? Well, it’s a group called The Independent Asylum Commission. This group is described as being “a body of legal and professional experts on refugees”. Well now, therein lies the rub, because it’s nothing of the sort. Yes it has a co-chair in the form of Ifath Nawaz who is the President of the Association of Muslim lawyers (Do Muslims need their own association? Is there an association of Evangelical lawyers?) Maybe they do since Nawaz and her colleagues have campaigned for UK laws to be changed to become compatible with the Sharia – arguing that failure to do so will breach the human rights of Muslims. In addition, the group’s members have said that they also wish for Sharia to become the dominant law-code in the UK. So, Nawaz is clearly a woman whose opinion is magisterially impartial, a shill for sharia. The IAS also has Nicholas Sagovsky as a self-appointed Commissioner. He has a long record of opposing efforts by the British government to impose controls over immigration. Last but not least is the frontman for the group, former Chief Inspector of Prisons Lord Ramsbotham. Now Lord Ramsbotham is a busy chap. When he’s not advocating greater support for the families of convicts, he’s the kinda guy that urges the release from prison for killers such as those who murdered young Jamie Bulger, in other words he is a sopping wet liberal. This is a professional whinge-fest and not the group of sober balanced intellects the BBC pretends

I do believe the UK has an issue on asylum but it is the opposite to which this group suggests. We are far too open to asylum seekers and our traditional British hospitality has been outrageously abused by numerous bogus “asylum seekers.” We also fail to promply deport those who have no right to be here, and of course the fundamental lure of coming to Britain in the first place – the Welfare bonanza – is also in need of drastic reform. None of these points are discussed by the BBC because it empathises with the IAS loathing of the United Kingdom that unites all on the left. Just some of the balance you won’t be hearing today.

Whoops – I see Laban has also blogged this at the same time as me! So, two for the price of one today!