The BBC is a strange creature. It is profoundly anti-Christian, in my view, and as detailed in these pages over the years, but yet it has a certain fondness for the Anglican Church just so long as that institution careens off in a nihilistic leftist direction. It has been fawning in covering the commentary by well known economist Rowan Williams in the FT this morning in which he backs the farcical “Tobin Tax”. On Today this morning it brought on that wholly fool Bishop of London Dr Richard Chartres (7.50 a.m.) who was made to essentially apologise for not immediately having gone on-side with the anarcho-communist rabble outside St. Paul’s! Chartres was an embarrassment who grovelled and in essence came out supporting “the ideas” of the protesters. So, with the St. Paul’s theological establishment dripping wet and opposing Capitalism, and with Rowan Williams doing his best to ruin our Banking system, a warm reception from the BBC is almost guaranteed. I would go further and suggest that just as the BBC has rotted away from within, embracing leftism instead of pursuing impartial reporting, so has the COE rotted away and St.Paul’s stands aloft as a glorious whited sepulchre. 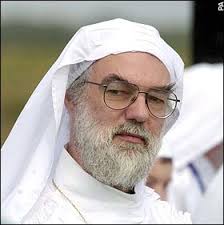 I see that the BBC is giving massive prominence to our Sharia-compliant leftist loving Archbishop of Canterbury’s latest attack on the Coalition. Williams waffles on about the Government introducing reforms no-one voted for. Can’t seem to recall the Druid taking to his platform during the Labour years to denounce them on a similar basis but I suppose since this story conforms to the BBC narrative about “fear and anger” it was always going to be given a blast.

What a sight to behold! Gordon Brown, flanked by fellow lefties Australian prime minister Kevin Rudd and the Bishop of London, Richard Chartres, lecturing bankers on the need to behave morally. Setting the scene, the BBC had Druid Williams on this morning offering a series of empty-headed homilies concerning our need “to discover something of what it is to be human” – ie socialist. The Archbishop gets such an easy ride from the BBC, as indeed does the arch hypocrite Brown. The BBC seems to have missed the supreme irony of Brown lecturing anyone on the need to distinguish between right and wrong as he heads up an administration which is a stranger to the truth, mired in deceit.

Yes, if you want to get a good dose of BBC bias in full-on mode, just tune in to the morning Radio 4 flagship “Today” programme. I have to admit I rarely listen to it these days since it only spoils the start to the day for anyone who is not a foaming at the mouth lefty. But in the interests of this blog, I did bite my tongue and tune in this morning from the “Thought for the Day” section at 7.45am all the way through to main post 8am headlines political interview. My worst expectation were immediately exceeded when I realised that the “Thought for the Day” contribution was a sterling defence of the Imam of Canterbury by a Muslim contributor. Amazingly, he claimed that Rowan Williams had been “misunderstood” and that “most people” were now coming around to sharing this view. This was a pure PR piece engineered to offer support to the not so good Dr William. Following straight on from this was another item on Druid Williams, and the fact that he faces a meeting of the General Synod later this week. Again calls from within the Church for him to resign were downplayed and instead the claim was made by the BBC reporter that Williams was a much loved and respected figure who was holding the Anglican Church together and that it was inconceivable that he would resign. Do you think Lambeth Palace writes the scripts for the BBC?

After the News headlines at 8am, the lead story was “Is Afghanistan a failed State?”, a favoured BBC theme. One might more accurately ask “Is the BBC a failed broadcaster?” We had the usual “It’s a quagmire, get us out of there” defeatist mindset in full flow, with the BBC presenter seemingly oblivious of the fact that Al Qqueda have used Afghanistan as a base from which to bring terror to the West. The hapless David Milliband (Aged 13 and 3/4) tried to explain why we need to defend our interests by staying the course here and fighting and killing the “insurgents” in the southern part of Afghanistan but the BBC interviewer seemed much more sympathetic to the French and German view that whilst armed forces could go to Afghanistan, they mustn’t go to where the danger is! A pacifist army that travels the world is probably the BBC’s fantasy – a crack legion of aromatherapists is something they MIGHT just tolerate! And so it ended, and so did my interest in listening to this drivel. You know it’s when you actually reflect on how interviews are constructed, on how interviewees are chosen and allocated time, and on how running orders are established, that the anti-Britishness of the BBC comes through in all its glory. Do you ever listen to the “Today” programme and if so, can you share how you do this for more than 15 minutes without feeling nausea?

Did you see that the BBC has given due prominence to the outrageous claim by Rowan Williams, part-time Druid and full time hypocrite, that Sharia law in the UK “is inevitable” and indeed could help sustain social cohesion? Well, I’m not sure if beheadings for thieves in Blackburn, stonings of homosexuals in Bradford, maybe the occassional public amputation for adulterers in Birmingham will really add the social cohesion that Williams imagines. There appears to be a move afoot to institutionalise Sharia law here, with the dreadful Williams now becoming an advocate for this novel form of social cohesion. Maybe the BBC could provide us with insight into just how much “cohesion” Sharia has brought to those wretched countries that have embraced it?

UPDATE: Here’s a chance for Druid Williams to get real insight into the joys of Sharia Law. Let him buy a ticket to Tehran (One way, preferably) to witness the coming stoning to death of two women. Two sisters – identified only as Zohreh and Azar – have been convicted of adultery and have now been sentenced to be stoned to death. Adultery is a crime punishable by death in the Islamic Republic of Iran, in accordance with the canons of Islamic Sharia law. The Iranian Supreme Court has upheld the stoning sentence. Zohreh and Azar have already received 99 lashes for “illegal relations.” Yet they were tried again for the same crime, and convicted of adultery on the evidence of videotape that showed them in the presence of other men while their husbands were absent. (Best Druid Williams leaves his wife Jane at home!) The video does not show either of them engaging in any sexual activity at all. Won’t it be fab when we get what the Druid wants – it will certainly create a few vacancies in the Media. Good for social adhesion, and coming to a town near you if Williams and his fellow dhimmis prevail. Any chance of the BBC providing a platform for those of us who oppose a return to dark ages savagery?