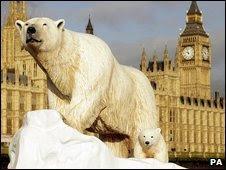 Polar bears have long been the sacred cause of warmists, especially those at the BBC. This story from last year shows the ridiculous political lengths that they will go to to claim that despite abundant evidence to the contrary (most populations are actually rising), the species is at risk of extinction because of nasty emissions. Now BBC reporter Rajesh Mirchandani – who has secured a cushy beat with the BBC that allows him to pontificate freely about melting arctic ice, including this gem of a scare story – has filed this bellyaching piece bemoaning that the US government has shown a glimmer of sense for once and pulled back from declaring the bears as “endangered”. Such news perhaps could be seen as a sign for celebrations, especially for the biodiversity obsessives at the corporation; nice, cuddly polar bears aren’t going to leave us anytime soon. But no. Instead, it is used as a peg for Mr Mirchandani to give an airing to one of the most astonishing attacks on President Obama that I have seen in any BBC copy. He writes:

The Centre for Biological Diversity – one of the groups trying to get the polar bear listed as “endangered” – said the ruling showed that the administration of US President Barack Obama was continuing to defend Bush-era “anti-science decisions”.

Ouch! Not his words, admittedly, but he’s created the platform for them, and there’s no balancing copy. It shows in its rigid one-sidedness that greenies like Mr Mirchandani will savagely bare their ursine teeth and sink them into any target they want – no matter how venerated – if their inflexible religious view that the science must be obeyed is crossed. Come back McCarthy – all is forgiven.

You know it wouldn’t be a normal day in Beeboid land without a smattering of AGW stories. This is the new religion of the Left and the BBC always lives up to low expectations on the topic. This morning it’s been running this story about the US Government “finally” recognising that the Polar Bear is a “threatened species”. It quotes the Environ-mentalists partially approving of this decision whilst still lashing the Bush administration for not going even further. The thing that I find odd in this report, and so true of much BBC reporting, is the missing statistic that the Polar bear population in Canada is actually INCREASING. This must be the first time in natural history that the increase in numbers of a species is indicative that it’s population is in danger. Then again, don’t those bears like so cute? Let us consider the cold facts concerning the Polar bear but that means showing all sides to the story – the BBC shows but one.

Interesting to note that the BBC is running a story here informing us that Polar bears are “at risk” in Canada. It’s all very carefully worded but the impression given is that the “climate change” which “may” be threatening these animals in the Canadian wilderness is anthropogenic in origin and thus requires “a plan” from the Canadian government. Just one slight problem – contrary to the content of this report – the Polar bear population in Canada is INCREASING! Do we need “a plan” to stop that as well – maybe a bear cull? Who knows – the BBC doesn’t report such inconvenient details since they rather melt away the whole AGW agenda at play here.