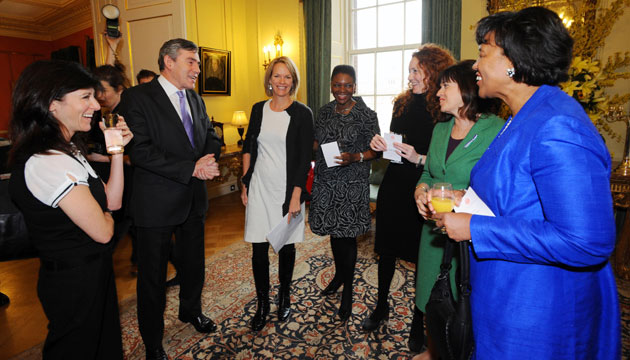 One of the most disturbing features of the entire News International/phone hacking has been the systematic elevation by the BBC of a rogues gallery of moral hypocrites; John Prescott. Steve Coogan, Hugh Grant, Chris Bryant and now, of course, Gordon Brown.

Brown has joined in the jiahd against Murdoch and the BBC have played it with violins for him. However as Guido points out, the Brown allegations are far from clear cut and NI seems quite content to counter his allegations. But the BBC coverage rolls on – desperate to damage Murdoch as much as possible and oblivious to every other angle.

It may be a new week but the BBC is very clear on the need to STOP Rupert Murdoch taking control of BSkyB. Listen to this onslaught led by Robert Peston and were that not enough for you then try this from Nick Robinson. It’s remarkable to see the State Broacaster taking such an active and clearly biased role in this story as it seeks to buttress it’s own massive monopolistic power at our expense. One surreal angle that the BBC has been pushing is that the Murdoch evil empire is so big, so powerful, that it constitutes a threat to that all important “diversity.” A B-BBC reader informs;

But just who are thebiggest providers of web services? The United Kingdom Online Measurement Company Ltd. www.ukom.uk.net top web brands. While the profile of businesses populating much of the Top 50 has changed since2004, the Top 10 web businesses place the BBC 5th behind google, facebook, msnand yahoo. Sky is 15th, News Corp papers are 29th.

The fact is that it is the BBC which constitutes the single BIGGEST threat to democracy and diversity of opinion and it is relentlessly taking advantage of the (defunct) NOTW saga to try and nail Murdoch. This is the story that the MSM seems oblivious about and so you will excuse me if I harp on about it. 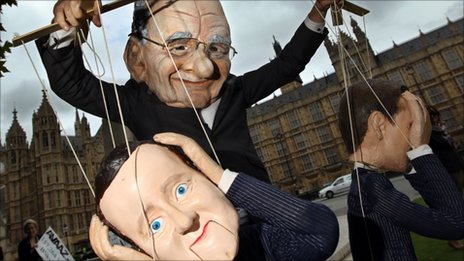 The BBC is hysterical in the sustained attack on Murdoch. Give THIS a listen to if you want to hear the comrades in full battle cry. I was particularly amused when Humphrys pointed out the global reach of the evil Murdock empire. So unlike the BBC!! And if that was not enough, try THIS if you have a strong stomach. There is NO pretence of balance here, just unrestrained bias against Rupert Murdoch. Note the image they use to accompany their Jihad against NI.

I beg your indulgence for another hacking scandal post. The topic on Nicky Campbell’s phone-in this morning on Radio Five Live was: “Will you mourn the News Of The World?”

Kelly from Stafford was good value:

For the third consecutive day, the BBC devotes a huge amount of resource to further excoriating the Murdoch Empire. Having gained the scalp of the News of the World, the BBC agenda moves on. First, in order to sustain its deluded image of solidarity with “the workers”, the BBC line is that  lowly journalists have been sacrificed to save those higher up. Right on, comrades. So the new line is that closing NOTW is a despicable act and that justice will only be done when Coulson is imprisoned, Wade sacked, the BSkyB deal scuppered, Cameron damaged and Miliband elevated to the high moral gound.

Perhaps the greatest example of BBC bias is this interview with Chris Bryant, the new high priest of ethical standards and William Shawcross. Just listen to the interruptions Shawcross endures and compare that to the sympathetic silence afforded Mr Underpants.

If you then listen to the prime time slot, at 8.10am, it consists solely of a BBC journalist interviewing two other BBC journalists. Robinson is cheer-leading for Miliband (“He has found his voice this week” Robinson gushes) whilst Peston has the BSkyB  acquisition in the cross-hairs.

I know I have focused on little but this story for the past few days but it’s because it is quite horrific to see a media bully in the shape of the BBC use the N OTW story to further it’s own objectives. Press freedom, consumer choice – this means NOTHING to the BBC. It simply aims to further deepen its own monopolistic position, along with the likes of The Guardian. 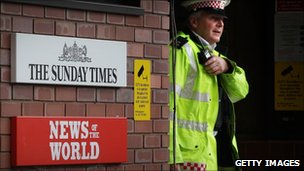 Well, it’s a dramatic if not ruthless decision by the Murdoch empire to close The News of the World. In a sense one less trash newspaper is to welcomed, although it reduces competition and choice whilst ensuring that the leftist point of view increases, something I am certain the BBC will be delighted about. I’m just hoping that the disgraceful practice of phone hacking was restricted to NOTW and did not extend to papers of quality such as the Daily Mirror, to name but one. At another level, this decision by Murdoch shuts the attack on NI down, the crowd have gotten the (deserved) scalp they wanted. I suspect the BBC will now move to focus the attack on Cameron. Well, the sun rises on a  new day and the BBC continues to attack on The Sun’s proprietor, Mr Murdoch. Yesterday Millie Driver provided the emotional attack line, today it is the families of our Armed Forces personnel killed in the line of duty in Afghanistan. BBC is in overdrive on this one and the aim seems to be to stop the acquisition of BskyB by Newscorp. The morally virtuous Labour MP Chris Bryant (above) along with the integrity-proofed Mr Miliband are given the opportunity to preen meanwhile The Guardian was eulogised. In essence, the BBC is lobbying like mad to scupper the BSkyB deal, to damage Cameron and to take the heads of Wade, Coulson and as many other NOTW journos as possible.  Is this the appropriate role for the State Broadcaster? Is it manufacturing the intensity of this story? Is it cynically manipulating the news agenda in order to take a pot shot at those broadcasting rivals with which it disagrees? Is NOTW the ONLY newspaper to have hacked  into mobile phones? Has the BBC ever used illegal and inappropriate methods?