BBC’s Jeremy Paxman, flagship presenter amongst a flotilla of BBC presenters, sets off on a mission to aid Hamas and uphold the embargo on reason, logic and truth.

(Note: The BBC seems to have issued a special edict. A permanent sneer must be attached to matters concerning Israel. The qualifying prefix “Israel says” must be added to anything speculative, factual, or plain as a pikestaff, if it alludes to Israel in any favourable or mitigating kinda way, to remind the gullible viewer that “Israel” may be lying.)

Newsnight. The Trial.
“Now; Israel has started deporting some of the survivors of the convoy which set out to bring aid to Gaza and ended up being attacked by the Israeli military-who-killed-9-people. They’re being deported from a country they hadn’t want to go to anyway. The UN Human Rights panel, a body usually roundly ignored by Israel, meanwhile has condemned the attack. It’s striking that the US hasn’t questioned Israel’s right to blockade Gaza which they say is an attempt to protect their citizens.
But what’s it like inside Gaaarhza? Tim Whewell has spent a day there.”

Oh what the hell. I might as well add emphasis to the whole lot.

NB. Tim W’s report was almost reasonable yesterday. Will he be psychologically spooked into colluding with Paxman the bully?

Not really, till he consults the repulsive, ex-BBC, Christopher Gunness of the UN relief and Works Agency, whose primary role is spewing propaganda against Israel. “Poverty rates have gone up by threefold in the last year” he says with a triumphant smirk.

“There’s not many people here with not enough to eat,” says Tim, casually. Wait a minute, we thought people were starving but no time for splitting hairs. We’ve a mission to complete.

Back to Pax.
“We’re joined now from from Washington by US Assistant Secretary of State P J Crowley. Mr Crowley why hasn’t the United States condemned this Israeli attack on the flotilla?”

“Well, the US supported the UN Security Council President’s statement which does use the word condemn, we obviously deeply regret the loss of life, we’ll continue to work with the international community to see how we can expand the amount of assistance to the people of Gaza.”

“So the United States does condemn this attack by the Israelis?”

“Well, the US regrets that this confrontation led to a civilian loss of li……..”

“But we absolutely understand that Israel has legitimate security needs, its people have suffered through rocket attacks over months and years from Gaza, the Israelis had indicated in advance to this flotilla that there was a mechanism by which this material could be inspected and then brought into Gaza, [……….]”

No punctuation needed because the beginning was uttered under Paxman’s breath with the comically exasperated yet sarky tone typical of Rowan Atkinson’s Blackadder and straight into the next line of attack.
Now Paxman is emoting about the settlements, “Are we entitled to wonder” [….settlements. Joe Biden. deliberate. blah blah….. ] “and now launching this attack on the flotilla. Is there anything Mr. Netanyahu could do which would incur condemnation from the US?”

“You use a very loaded term there by saying this was the launch of an attack…. this was a military operation by Israel, which Israel believes is perfectly legal to be able to make sure that it can prevent the flow of dangerous materials including weapons….”

“Could you give me another word apart from that”

“This is a very legitimate concern that Israel has…”

Paxman’s unimaginative, worn out tactic is to attempt to trap the accused into saying a particular word, which Paxman hopes will reveal what he has deemed to be the truth, so he can conclude with a dramatic, “gotcha!” flourish. He wants to expose Mr. Crowley’s refusal to use the word ‘condemn,’ which is what professor Paxman deems righteous. He imagines he’s Rumplole of the Bailey. Or, who was that barrister who won cases for the defence against all the odds, for defendants guilty or not? Oh yes, it was George Carman. Paxman is suffering from delusions of grandeur. Some loonies think they’re Napoleon, or Jesus. Paxman thinks he’s George Carman. He’s descended into a fantasy in which he is judge, jury and probably executioner.

David Hughes in the Telegraph:

…the programme today has a drawback for political junkies and that is its general view of the world. If you took all the trendy liberalism that makes up the BBC and bubbled it over the Bunsen burner until you were left with the purest residue, the irreducible core of metropolitan Left-wingery — well, that’s Newsnight.

It regards Right-wing politicians as some alien species, necessary (just) to the political process but viewed with either curiosity or contempt, depending on their demeanour. I’m sure this is not deliberate, that people aren’t consciously trying to present politics from a Left-wing standpoint.It happens because that’s the programme’s mindset.

I’m not so sure that the bias is always subconscious, but I do like the phrase “irreducible core of metropolitan Left-wingery”.

From Ace – who else was up for the Nobel Peace Prize?

Chinese Human Rights Activist Hu Jia – imprisoned for campaigning for human rights in the PRC, not as worthy as Barack Hussein Obama.

Wei Jingsheng, who spent 17 years in Chinese prisons for urging reforms of China’s communist system. — not as worthy as Barack Hussein Obama. (Not to mention the symbolic value of awarding a Chinese dissident on the 20th Anniversary of the Tianenmen Square Massacre.)

Greg Mortenson, founder of the Central Asia Institute has built nearly 80 schools, especially for girls, in remote areas of northern Pakistan and Afghanistan over the past 15 years – not as worthy as Barack Hussein Obama.

Prince Ghazi bin Muhammad, a philosophy professor in Jordan who risks his life by advocating interfaith dialogue between Jews and Muslims, also not as worthy as Barack Hussein Obama.

Afghan human rights activist Sima Samar. She currently leads the Afghanistan Independent Human Rights Commission and serves as the U.N. special envoy to Darfur and is apparently also not as worthy as Barack Hussein Obama.

What do all of the above have in common? Courage, dedication and scars on their back…

What do none of them have? A hot line to George Soros and a crease in their pants sharp enough to excite David Brooks…

And, of course, little or no mention at this time from the BBC – too embarrassing?

Actually, to be fair, Kirsty Wark was not overly gushing when she interviewed the Obama mouthpiece on Newsnight – and John Bolton was the perfect antidote to Charles “OBN Obama” Powell….

…I too had a go on Paxman’s blog. Similar result: 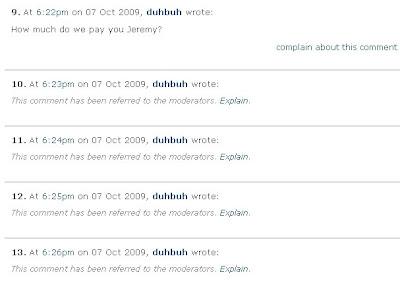 email
Jeremy Paxman famously asked the then Tory Home Secretary Michael Howard the same question 12 times on Newsnight. Former Newsnight editor Peter Horrocks chose it as his favourite moment when the programme celebrated its 25 anniversary, and the clip is available on the Newsnight website (unlike many other people’s favourite – the outing of Peter Mandelson by Matthew Parris, which the BBC refuses to rebroadcast).

On Monday Boris Johnson asked Paxman what he earns at least five times during the course of their interview. Newsnight decided to cut the segment from broadcast:

THE BBC was blasted last night over claims it cut parts of an interview where Boris Johnson attacked Jeremy Paxman over his wages.
It is claimed the London Mayor demanded “five or six times” to know the BBC anchor’s taxpayer-funded salary – thought to be £1million a year…
Johnson said: “We didn’t get an answer for that by the way – about your earnings.”
The BBC last night said cuts were due to programme timings and views were “fairly reflected”. Mayoral aides have called for the unedited interview to go out online.

The BBC’s tax-dodging superstars do not like it up ’em.

More on this from the All Seeing Eye.

(Hat tips to anyone and everyone who has mentioned this in the comments.)

I see the BBC has been shilling for the UN following that organisations petulant display that the Unwra will not re-commence its allegedly humanitarian mission in Gaza until Israel guarantess the safety of its workers. Suits me if they never recommence but I wonder why the BBC never asks why the Unwra does not idenify Hamas as a threat to its workers. Maybe they are related? Also, anyone catch Newsnight defining the Red Cross as ” a very conservative organisation” as it launches a verbal onslaught on Israel. Meanwhile Alan Johnston was afforded space to let us know how invincible Hamas is. Loved the way he talked of the Hamas culture of “sacrifice and martyrdom” – that’s homicide bombing to you and me. Nice stuff, Al Beeb – Hamas could not wish for a better PR campaign.