Remind me, what exactly is John Pienaar for, asks Biased BBC contributor Alan?  What does his ‘insights’ and ‘analysis’ bring to the picture?

His impressions are consistently either of an entirely bland stream of consciousness with little thought or a surprisingly different angle on a subject that hadn’t occurred to me as I listened to whatever he was later to dissect so incisively….and probably a take that no one outside the Labour party would think was based on reality.

Let’s cut out the middle man and have Balls or Miliband(whoever he was) present BBC politics.

Today’s effort was scrutinising Vince Cable’s performance at Leveson with a fine-tooth  comb….unfortunately it was a comb as effective as one  might be on Vince’s own follicly challenged pate out of which came the flood of excuses for his indiscrete declaration of war on Murdoch. Cable, rather than just shrug and say ‘yeah you caught me, and I meant every word’ shamelessly and pathetically squirmed like a schoolboy up in front of the Head.

Bluster and backtracking, excuses coming thick and fast and all accepted by Leveson as Moses accepted the 10 Commandments.

What was Pienaar’s analysis….’Well there you go….he’s innocent…under pressure, grumpy and being blackmailed by News of the World journalists who would seek to destroy the Lib Dems if he went against the BSkyB merger……who can blame him for an immoderate outburst?’

Of course none of these claims were investigated or substantiated….the word of the sainted Vince was good enough.

Just what use is Pienaar to anyone?  Just what use is Leveson when Blair and Campbell are cast as victims rather than the villains they were? Don’t you just love indepth, rigorous, challenging political scrutiny?

That’s why I watch ‘The Simpsons’. 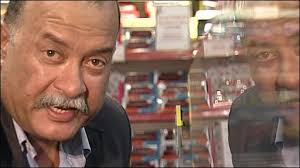 “For a long time it has been apparent that John Pienaar allows his delivery to be coloured by viewing the world through rose tinted glasses….a Labour Rose that is. Tory plans and policies are rubbished whilst Labour’s are ‘actually quite good’…..despite appearances!
I haven’t seen much criticism of Pienaar and began to think perhaps it was my imagination, until I read Peter Oborne’s book, The Triumph of the Political Classes, and the chapter on ‘client journalism’. This illustrates Pienaar’s reaction to the forced resignation of David Blunkett….according to Pienaar by the media ‘sharks’ hunting down Blunkett the innocent ‘victim’. Osborne tells us that ‘Pienaar did not merely present the Downing Street line very faithfully – it was almost as if Tony Blair or Alastair Campbell were speaking.’

Osborne tells us that ‘Journalists were recruited as an essential part of the apparatus of government control.’ I imagine some journalists were a lot easier to convince than others about the merits of a Labour government.

Pienaar today continues on his merry way….listeners may have heard him recently giving us the run down on the Border Agency chief, Brodie Clark’s statement to the inquiry concerning the loosening of border controls….”
READ MORE

Pienaar’s analysis seemed to bear little resemblance to the words and content that I heard. Pienaar suggested it was all a big mistake, confusion not conspiracy on Clark’s side…..I heard a man desperately trying to avoid any blame being attached to him, one who did not maintain a consistent story, one moment saying he allowed in passengers on grounds of health and safety, the next on the pretext of increasing higher security checks on higher risk passengers.

Pienaar seemed to be enamoured of Clark…..’The very model of a Whitehall civil servant with his steel grey hair and metal rimmed glasses. He’s choosing his words very carefully and the measured, cool Scottish accent just adds to the impression of a safe pair of hands who was doing nothing that he shouldn’t have been doing.’….and seemed determined to present him in as good a light as possible….essentially a good man doing his best to do a good job in difficult circumstances until unfairly having his reputation and professionalism brought into question by a scheming Tory politician.

This is Pienaar massaging the truth and subtly changing the perspective to give a radically different view of events favourable to Clark and designed to sandbag Theresa May by implication.

Pienaar does not shout his allegiances from the roof tops but they are there if you care to look…and I would judge they are clearly championing Labour’s narrative.