A favourite talking head, panellist and guest of the BBC is Green MP for Brighton, Caroline Lucas. She’s the only Green MP, so you’d think she’d be busying herself doing the job she was elected to do. (Saving the planet.) Instead, as Richard Millett shows, she and some other intellectually challenged activists for peace or whatever they call themselves are creating unnecessary carbon footprints with a mock flotilla on the Thames. Why? Activists for peace are not ‘pacifists’ – a term which implies apathy, inactivity and capitulation. These people shriek “Free, free Palestine” and “from the river to the sea, Palestine shall be free” discordantly and shrilly through loudhailers, with little or no knowledge or understanding of what their chant means. The word ‘activist’ resonates with righteousness. Pent-up hatred animates such people into flatulent, gaseous, hyperactivity, till they enact vacuous gestures of pointlessness. Oh! the smug looks on their faces. Do they know what ‘From the River to the Sea” means? The Greens have links with undesirable organisations, antisemitic tendencies, and are popular with the BBC. 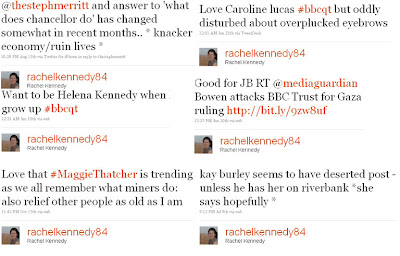 Piers Scholfield, one of the many BBC journalists reporting from the Chilean mines, was a new name to me. Just had a little look back through his Twitter account. You couldn’t make this stuff up: 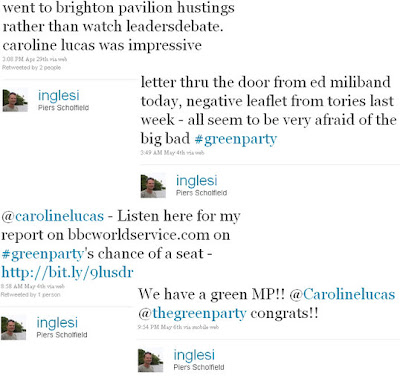 Caroline, please listen to my gushing report about your election chances, slurp slurp.

A Brighton-based BBC Green Party supporter reporting on the Green Party in Brighton during the election. Your licence fee at work.

I’m getting quite a collection of screenshots of BBC employees expressing political opinions on Twitter. They’re all lefties. Funny that. I guess the BBC’s thousands of right-leaning employees take their duty to uphold the concept of impartiality more seriously. Unless – and I know this might sound crazy – there aren’t many right-leaning employees at the BBC, and they don’t express political views on Twitter because they fear opprobrium and career stasis.

Evan Davis: I love the idea that the first Green MP is possibly going to hold the balance of power in the House of Commons…

[Update Wed March 3. I see the photo has caused quite a bit of discussion. Chris T-T is of course pissing in the wind asking for money, but on reflection I can see his point about use of the image. I too would be pretty angry if, for example, the BBC used a photo of mine without permission. Therefore, in the interests of reserving my right to occupy the high moral ground and go apeshit in similar circumstances, I’ve replaced the picture with a link. It was only ever incidental to the point being made anyway (I could have just as easily linked to the Brighton Theatre Royal’s own website). No doubt this’ll piss some of you off, but there it is.]

Further to my earlier post pointing out that The Now Show will be on three nights a week during the election campaign, I see that two of the regular cast – Marcus Brigstocke and Mitch Benn (along with other members of the BBC’s left-wing comedy establishment) – are in Brighton tonight (via Twitter)

Interestingly, the poster fails to mention what the event is for:

Proceeds from the gig will be going towards funding Caroline Lucas’ historic bid to become the UK’s first Green MP.

I guess the chances of hearing a Brigstocke rant or Mitch Benn song taking the piss out of the Green Party on Radio 4 are pretty low, then.

Update Sunday Feb 28. Response from Mitch Benn in the comments. He doesn’t endorse Lucas or the Green Party, but he supports them because they’re not the BNP. And Marcus speaks truth to power. Something like that.

(Here’s someone who likes leftie comedians but is unimpressed by their support for the Greens. Update. Link now password protected. Cached version here.)