“Shaykh Khalid Yasin is an American Muslim teacher, extremely popular among young European Muslims. He has embarked on a mission to de-radicalise them.”

That’s what the BBC/RedRebel film on Geert Wilders told us (see yesterday’s post).

Just Journalism points out that Yasin was one of the preachers of hate exposed in the 2007 Dispatches documentary Undercover Mosque in which film is shown of him saying the following:

“This whole delusion of the equality of women is a bunch of foolishness…There’s no such thing.”

His claim that missionaries infected Africans with the AIDS virus, which I quoted yesterday, also appears in the Dispatches film. (A pdf transcript of Undercover Mosque can be read here.)

Channel 4 showed Yasin as he really is – a divisive conspiracy-believing radical who describes the beliefs of other religions as filth and refers to non-Muslims as kaffirs. On the other hand the BBC, in its eagerness to attack Wilders, broadcasts a film describing Yasin as a popular teacher on a mission to de-radicalise young Muslims. It almost beggars belief, but quite frankly nothing surprises me about the BBC any more.

UPDATE.There’s more on the Wilders film at Gates of Vienna, including a copy of a comprehensive letter of complaint.

Here’s a transcript of a 2005 programme about Yasin that was broadcast on Australia’s Channel 9. He’s a 9/11 truther, says homosexuality is “punishable by death”, and lies about his qualifications.
And some more background on Yasin here and here.

(Thanks to all in the comments)

The Geert Wilders documentary on BBC 2 last night, the latest in the recent profusion of inept one-sided films attacking those who disagree with prevailing BBC leftist orthodoxies, has justifiably attracted a lot of criticism in the comments. However, it’s gone down well in some quarters:

You can see the film via the BBC iPlayer here, or on YouTube here.

It was made by Joost van der Valk and former Newsnight journalist Mags Gavan of RedRebel Films (bit of a clue in the name there, I think). The executive producer for the BBC end of things was Lucy Hetherington, partner of Newsnight’s Michael Crick and daughter of former Guardian editor Alastair Hetherington. In the comments Pounce points out that this timeslot on BBC 2 is usually occupied by a Top Gear repeat or Escape to the Country, raising suspicions that the film was dropped into the schedule to counter last night’s Dispatches about Muslim schools on Channel 4.

There was so much wrong with “Geert Wilders: Europe’s Most Dangerous Man?” it’s difficult to know where to begin, but here are few highlights for starters.
[Read More]

The title – not exactly subtle, but I suppose it is at least in keeping with the ham-fisted approach of the film itself.

We were introduced to Shaykh Khalid Yasin, described by the narrator as “an American Muslim teacher, extremely popular among young European Muslims. He has embarked on a mission to de-radicalise them. He is also very critical of Geert Wilders.” 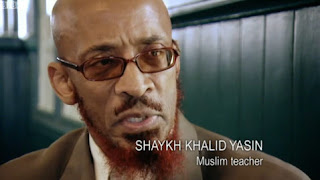 Here are some quotes from Yasin that the filmmakers didn’t want you to know about:

“An AIDS virus, that is a classic disease that was created in Fort McKinley, United States. Fort McKinley, the AIDS virus,, 63,000 gallons. Missionaries from the World Health Organisation and Christian groups went into Africa and inoculated people for diphtheria, malaria, yellow fever and they put in the medicine the AIDS virus… I don’t say [that AIDS was created] by the US Government. I say there were at least five governments that acted in complicity.”

And here’s a video of Yasin talking about some unspecified policy paper relating to Muslims. Does this sound like someone who wants to de-radicalise young Muslims, as the BBC would have you believe?

Later in the Wilders documentary there is a sequence on Pim Fortuyn. The narrator tells us:

“His political ambitions came to a sudden halt on the eve of the 2002 national elections.”

Yes, getting murdered tends to do that to your political ambitions. The film does go on to say he was assassinated, but what a bizarre way to begin describing his death.

We are told, by way of introducing some of Wilders’ supporters in the States, that “America is the land of the conspiracy theory”. Oh really? How about Egypt where 43% think Israel was behind 9/11, or Saudi Arabia where a tagged migrating bird is viewed as an Israeli spy? The narrator describes America in this way because it serves to delegitimise the film’s targets.

Later, portentous music plays over footage of the Israeli flag as the voice-over intones: “Looking up ‘Geert Wilders’ and ‘Israel’ on the internet, van der Valk finds over half a million references.” Yes, and looking up Mags Gavan blows a monkey returns more than 80,000 references, but it doesn’t prove a thing. This piece of lazy innuendo is followed by wild unfounded speculation over Wilders’ funds and motives. Is he in the pay of those evil Zionists, or could he in fact be an actual Israeli spy? 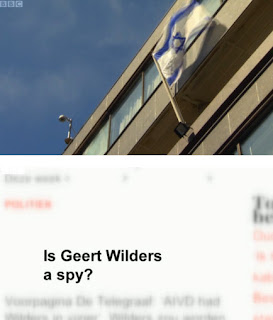 At one point the narrator informs us that the Wilders film Fitna is propaganda. Talk about pots and kettles. I’ve barely touched on just how bad this documentary is (and please feel free to add further observations of your own), but one thing seems clear: if you’re a filmmaker with a leftist worldview and have friends at the BBC, our licence-funded state broadcaster is only too happy to find money and airtime for any old rubbish you produce.

UPDATE. A further thought – the film had very little to say about Wilders’ trial and the chilling effect a guilty verdict could have on the freedom to criticise Islam.

Although there was plenty of news on the BBC about Geert Wilders last year when he was banned from entering the UK, now that he’s on trial in the Netherlands, the BBC has gone quiet.

One would have thought there would be much material to interest the world’s foremost news organ in this story. For a start the 15 defence witnesses that the court has disallowed, leaving only three, and causing Mr Wilders’s supporters to wonder whether the trial can have a fair outcome.

Those of us who are hurt, offended or frightened by anti-Semitism should always apply a test whenever negative feelings about Islam overcome us.

We have to ask ourselves whether our negative thought is rational and based on a genuine concern, or just a phobia-like distaste, a tarring with the same brush, a generalisation based on myth and mystery as per anti-Semitism.

While we mustn’t scapegoat groups of people, dehumanise them or blame them for all the evils in the world, surely we can criticise what needs criticising, and not be afraid to make value judgments when necessary.

At the time of writing, most references to Geert Wilders on the BBC website are dated last year; one by Mark Mardell actually puts his case in a reasonably evenhanded manner.
Many people distance themselves from Geert Wilders’s campaign, but there is considerable and undeniable logic in what he is saying, which should be reported and given a fair hearing. So for that reason I think the BBC should not only be reporting the trial, but also discussing the issues it brings up.