You can understand WHY the BBC are so entranced with Baroness Manningham-Butler. First, she recommends that we talk to the Taliban. Now she wants to see illegal drugs legalised. Yip, she’s there kinda gal. 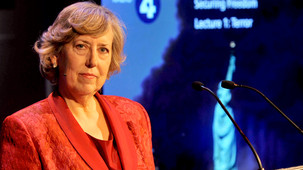 “The BBC reports that the chairman of the Afghan High Peace Council, Burhanuddin Rabbani, has beenkilled with several other people in a bomb attack in Kabul, officials say.’

Strange how the real world catchs up with us. Eliza Manningham Buller has beenlecturing us on the need to engage with the Taliban, to negotiate andpresumably compromise (as soon as we leave Afghanistan you can be sure theTaliban won’t be compromising or working in ‘coalition’) in the BBC’s ReithLectures.

Only today did she restate that position….’In this lecture I want to arguethat states should, wherever possible, seek political solutions andreconciliation.’….how negotiation brought peace to Northern Ireland….’Lookat Northern Ireland, where former terrorists are in government. We should welcome this, not damn it.’….only of course there is nopeace in Northern Ireland…the war continues, it just isn’t reported as muchand as with militant Islam, government ministers prefer to sweep uncomfortable,inconvenient facts under the carpet rather than have to deal with them….haveAdams and MacGuinness left the IRA?

I imagine it is quite hard to negotiate with someone whose only intention is tokill you and to re-take power. Why would the Taliban negotiate? If we are offering negotiations it can only bebecause we are ‘losing’…therefore if the Taliban are winning why compromise? Yet again she takes up the cudgel against our foreign policy (another BBCbete noir) saying it incites Muslims to radicalise….Muslims who are under thecosh of dictators in their own countries attack the West because we supportthose dictators.

Except that when we depose Saddam Hussein it is those very radical Muslims whofight to keep Saddam and his regime in power.

You must despair when you listen to Manningham Buller….a woman at the heartof the Establishment who is quite clearly so out of touch with reality….butunfortunately is so representative of much of the mentality within thatEstablishment….no less at the BBC with which her views chime and resonateexactly.” 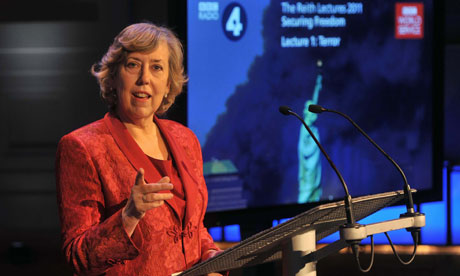 Unfortunately this is precisely what we get with most BBC programmes, tailored to suit an agenda, shaped to shape your ideas, sanitised to remove difficult and contrary questions.
Eliza Manningham Buller, ex spook, in her first Reith Lecture on ‘Terror’ must have followed the BBC handbook to the letter and has managed to pen a tract worthy of any member of the Stop the War Campaign or the Socialist Worker’s Party….or indeed many a BBC journalist. http://www.bbc.co.uk/programmes/b0145x77

The lecture was, considering the source, laughable in content and in its intended outcome. What has made this worse is that it is the result, presumably, of much thought and consideration by someone who has unique knowledge and privileged access to information and analysis of events….and yet manages to put together a discourse on the War on Terror which lacks logic, reason and insight as well as coming to conclusions that clearly have no basis in reality.

Just a few contradictions from our ex intelligence chief;

9/11 was a crime not an act of war, or 9/11 was a war in defence of their political establishment, culture and society; Muslims attacked us because they were angry about our support for dictators, or Muslims attacked us because we removed a dictator; force of arms and intelligence cannot defeat terror, or we had to attack Al Qaeda and the Taliban and intelligence and arms were critical to success in Northern Ireland; It was the Palestinian’s plight that recruited Al Qaeda terrorists, or it was a need to belong and search for excitement that recruited terrorists; It was nothing to do with Islam, but Al Qaeda wanted to restore the Islamic Caliphate.

And of course we must negotiate with Al Qaeda….presumably we will be negotiating with an ‘idea’, but if we cannot go to ‘war on terror’ then how can we ‘negotiate with terror’?

Her final nonsense was to claim that she was encouraged that most people did not give victory to the terrorists as they refused to be intimidated and refused to support the diminution of our civil liberties.

Really? The whole of this speech is an historic example of cultural cringe, a cowering before the Muslim terrorist intimidation and his apologists in the Liberal media that it shall surely count as one of the most pitiful examples of a nation’s ’Establishment’ , its political and intellectual leadership, surrendering its values, culture and right to exist.

And what is the most telling aspect of this whole sorry charade is that throughout Manningham Buller makes no reference to Islam itself as the source of the ideology that drives these attacks.
Bin Laden couldn’t make it clearer, Islam is the banner under which he marched, he intended to restore the Caliphate and take Islam to power across the world.

Rule one is know your enemy, know his intentions and beliefs. For a senior Intelligence officer to be in denial or ignorance of that is an absolute betrayal of the people of this country, the whole West in fact and those that rely upon the support of the West to defeat those much derided ‘dictators’ in their own lands.

If the West falls and takes her democratic values with her the world will be a much poorer and dangerous place. Her every word could have tripped off the tongue of any BBC journalist or flowed from his pen without thinking twice. Shouldn’t be surprised if we look in the back of one of Jeremy Bowen’s ‘lost’ notebooks that we find the first draft of this speech….in Arabic naturally.

I wonder if pillow talk influences her in any way?….”Her husband, David, is the son of a former Lieutenant Colonel and a former lecturer in moral philosophy at St Andrews University. He has recently retrained as a carpenter. An Irish Catholic by birth, he is said to have once held strong left-wing views.”