Question Time tonight comes from Cheltenham, birthplace of Eddie ‘the Eagle’ Edwards and Arthur ‘Bomber’ Harris. It has 3 councillors representing the “People Against Bureaucracy” Party.

On the panel tonight we have David Willetts MP, Tessa Jowell MP, Phil Willis, Sir Max Hastings and race-obsessed historian Dr Maria Misra who writes for the Guardian and the New Statesman about how nasty the Raj was. She has form on QT.

For those playing the Buzzword Bingo, we’ll be playing the Thatcher Rules which means that congratulations on her 85th birthday when combined with your Iron Lady joker are an immediate win. However normal points only will be scored if it is combined with decline of industry, cuts, sleaze, doom or misery. Biased-BBC is giving away a free blog mug and t-shirt for any references to Dennis MacShane being expelled from the Labour Party today for claiming office expenses of £125,000 for a shed.

The LiveBlog will also cover the entertainingly awful This Week, presented by Brillo and Michael Portillo. Rumours that the pie-crazed co-presenter Diane Abbott was history after her surreal elevation to a Shadow Spokesman job preaching against obesity seem to be wide of the mark and she’s still on the list.

David Vance, TheEye and David Mosque will be slashing the Quango State here from 10:30pm.

UPDATE: Nigel Farage was supposed to be on tonight. More details about the BBC cancelling him are in the comments.

So as not to clog up the Open Thread, the comments field below contains some figures on this week’s edition of Question Time from Birmingham, where Baroness Warsi (pictured, for Bupendra!) faced a jeering David Dimbleby – oh, and a jeering audience too.

Question Time tonight comes from Birmingham, largest council in Europe and which has seen the invention of gas lighting, custard powder, Brylcreem, and the magnetron.

For those playing the Buzzword Bingo, we’ll be playing the ToryBashing Rules which means that pro-Tory remarks will score double because they’ll be as rare as hen’s teeth. Playing your Child Benefit joker combined with protect universal benefits or destroying the postwar consensus only gets the usual score….however it’s a double score played with paying for Charlotte’s pony, with second skiiing trip or Jessica’s piano lessons.

The LiveBlog will also cover the entertainingly awful This Week, presented by Brillo alongside the sneering and patronising Michael Portillo and the human airship Diane Abbott.

David Vance, TheEye and David Mosque will be Digging For Victory here from 10:30pm.

Following last week’s full-frontal assault on Coalition minister Vince Cable, this week’s Question Time saw another Coalition minister, Grant Shapps, fall victim to a rampaging bullock, being questioned and interrupted by David Dimbleby far more than any of the other guests (even David Starkey). The figures for this will appear in the comments field below.

Here’s a list of the guests who were interrupted most frequently by DD in relation to the length they were allowed to speak (yes, interruption coefficients!) in the months leading up to the general election. (There are a few joint first prizes):

Full details of the statistics behind this list can be found here.

By political party, that results in these totals for the award for Most Interrupted Panelist:

…and for the government of the day…

I wish David Dimbleby a long and happy retirement!

Question Time tonight comes from Manchester, which comes from an old Celtic word meaning “shaped like a breast”. As random trivia, the first edition of Top of the Pops was broadcast from a converted church in the city on New Year’s Day 1964.

On the panel we have Grant Shapps, Simon Hughes, Diane Abbott, David Starkey and an actor called Brian Cox (who you will all remember played Daphne Moon’s father in Frasier).

For those playing the Buzzword Bingo, we’ll be playing the Red Ed Rules which means players need only fill in the trades-union sponsored third of their bingo card to win tonight. Bonus points will be awarded for BBC strikes if you are holding a Tory Conference joker. Using the diagonal attacks allowed on the new bingo cards, you’ll see that Liam Fox is an instant win when coupled with Resign and Right Wing. This week, Thatcher with Cuts trumps any combination of Miliband and unelectable.

Returning as well, the LiveBlog will also cover the entertainingly awful This Week, presented by Brillo alongside the sneering and patronising Michael Portillo and the unspeakably terrible failure Oona King.

David Vance, TheEye and David Mosque will be on duty behind the bar here from 10:30pm.

Question Time tonight comes from Liverpool, home to the United Kingdom’s first council house and the first Juvenile Court. This may not be a coincidence.

Controlled by Labour and without any Tory representation, Liverpool City Council was rated in 2008 as the worst-performing council in the country. This may also not be a coincidence.

On the panel we have the BBC’s newly re-haloed St Vince of Cable, John Redwood, Caroline Flint, Ian Hislop and the nutter’s nutter Mehdi Hasan.

For those playing the Buzzword Bingo, we’ll be playing the LibDem Conference Rules which means players are banned from bringing knitting needles or helium balloons. Bonus points tonight for Spivs and use of the word Comrade. Be aware of the diagonal moves allowed on the new bingo cards, meaning for example that getting Thatcher, cuts and starving orphans in one answer, or perhaps Carriers, Bribing and Labour Voters on the purple squares, is an instant win.

Returning as well, the LiveBlog will also cover the entertainingly awful This Week, presented by Brillo in cahoots, apparently, with Michael Portillo and Diane Abbott again. Is she really back? Can this be true?

David Vance, TheEye and David Mosque will be engaged in legitimate crowd control here from 10:30pm.

Question Time is back tonight with a Labour leadership special – where the five candidates will be on the panel facing questions from a hand-picked audience.

The live-chat, moderated as usual by David Vance, David Mosque and TheEye, will start here just before 10:35 and finish just after 11:35 (UK time). 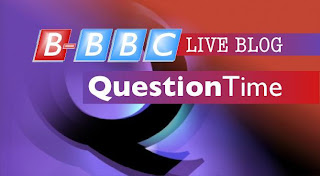 Our old favourite – Question Time is back tonight!

Not just any jewel, but the very Koh-I-Noor of BBC bias returns with a peach of a broadcast:  a Labour leadership special where the five candidates will be on the panel facing questions from a hand-picked audience.

You should all have received your new-season Buzzword Bingo cards by now. For the first programme you’ll need the set which has a picture of David Cameron eating a kitten on them. Play is expected to be brisk, as Thatcher, cuts, evil, fairness, and equality will all go quickly. References to private education win you a Diane Abbott shaped Souvenir SoapOnARope from the BBC Executive Washrooms. Bonus roll of the dice for any mention of Harriet Hatemen having 4 votes in the election.

Reverse triangulation is in play, and because of weekday maintenance on the Circle Line, this week Trade Unions are only valid with a common people undercard, and riots are wild unless your strike action joker has lapsed.

See you here on the picket-line, in the company of David Vance, David Mosque and TheEye, from just before 10:35 until just after 11:35. 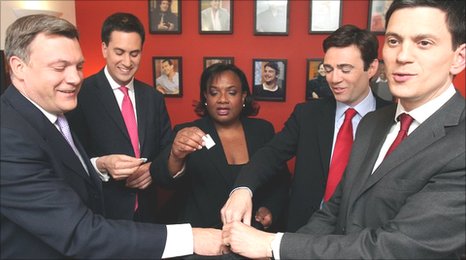 Summer is melting into Autumn and that means the return of Question Time. It kicks off on September 16th and it will be an ALL Labour panel. So, no change there then.
When I sat this photo I assumed it was a gathering of the QT production team but it appears these people may harbour political ambitions! Anyway, we will be liveblogging this for the new season and I hope YOU will come along and join in the inquisitorial fun each week.

Question Time tonight comes from Hartlepool; famous for hanging a monkey for being French, providing a guitarist for Iron Maiden and having an unwanted terrace house once owned by Peter Mandelson.

For those playing the Buzzword Bingo, we will be using the Either Banned Or Compulsory Rules – so ‘burqua’, ‘death tax’ and ‘national citizen service‘ are worth double BiasPoints. Any references to the Big Society win a BBC poster of David Cameron eating a kitten. Because of weekday maintenance on the Circle Line, this week Thatcher‘s are only valid with a Recession undercard, and Obama‘s are wild unless your BP joker has lapsed.

As usual the LiveBlog will also cover the entertainingly awful This Week, which continues its trawl through the Labour leadership candidates on the Sofa Of Despair. Tonight it’s Ed Miliband (no, not the banana one, the other one – think polyester suits).

David Vance, TheEye and David Mosque will have fingers on the moderators’ kill-switch here from 10:30pm.

(UPDATE: Bumped for the event)