On the Question Time panel from the LibDem conference in Birmingham tonight we have the increasingly senile Vince Cable, Priti Patel, Harriet Harman, Private Eye editor Ian Hislop and Justine Roberts from Mumsnet (married to Ian Katz, deputy editor of The Guardian).

Question Time returns tonight after the horrendous 9/11 Special last week. Tonight it is from Londonderry, here in tne peace process terrorist appeasing land of Northern Ireland. David Dimbleby is joined in Londonderry by NI Sec of State Owen Paterson, Diane Abbott, Nigel Dodds, Martina Anderson and Nicola Horlick. Martina Anderson, a convicted IRA bomber, may require subtitles. And as a taster for what lies in store, here’s lovely Diane…you have been warned! 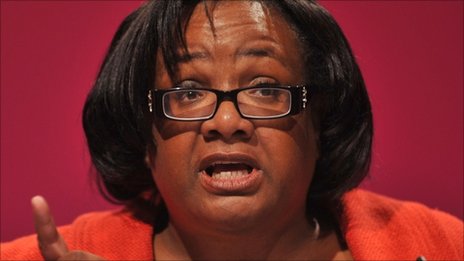 Don’t think ASE will be able to join us tonight but if David Mosque is around that would be great!! 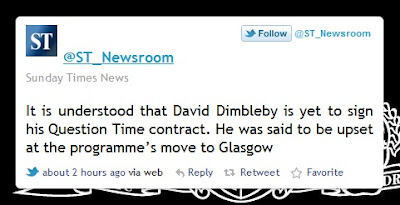 Guido is running with this Tweet right now – and it’s a sight to gladden the heart of seasoned bias-watchers.

Could it be? Or is he just playing hard to get for a salary bump? Who is likely to replace him? And (a different question entirely) who should replace him? Or is the whole concept past its usefulness?

David Cameron may have recalled Parliament today to discuss the looting and criminality, but we all know who really think they run the country. Yes, the BBC have recalled Question Time.

As usual the media are exaggerating the disturbances. What the BBC called looting in Liverpool, we all knew as Wednesday but most importantly for Police Force Service quotas we have heard no reports of smoking ban violations or inner-city foxhunting.

On the panel tonight we have an utterly unbelievable lineup of John “thug and adulterer” Prescott, LibDem Brian “my boyfriend didn’t deal in pot” Paddick, an exotically be-hatted Iranian called Camila Batmanghelidjh, also exotically be-hatted but in a different way Rev John Sentamu and Fraser Nelson. UPDATE: and David Davis – Cameron’s opponent for the leadership and a critic of his prisons policy.

As a frequent critic of the government Fraser Nelson fits the BBC panelist profile of token rightist nutter so why isn’t there a representative of the government? At all? Society has fallen apart after 13 years of socialist education and social policy but you’d at least expect BBC pet wet rag Ken Clarke on their speed dial to make a mess of the case for the defence.

TheEye will be joined by the splendid David Mosque in moderating what promises to be a partisan carve-up unparalleled in the West since the Treaty of Versailles.

TheEye intended to put together Shot Bingo for this event. “Deprived”, “Cuts”, “Fatcha” and so on. Maybe even doubles for Miners Strike. But the targets are too obvious and there’s an ‘elf’n’safety lawyer risk to how much liver damage would be caused. Tequila, my friends, is the way forward. But limit yourself to a bottle. TheEye, to keep a sense of refinement, may open some calvados.

UPDATE: The spat between the BBC and No10 about a Minister being on the panel

Question Time is currently on its summer break, and is scheduled to return on 8th September.

But! In terrific news for Bias-Watchers everywhere – there will be a special edition broadcast live this Thursday specifically to discuss the riots. It’s going to be terrible and you know it.

Join us here for the usual Live-Chat at 10:30pm on Thursday….and bring alcohol. You will need it.

Question Time comes tonight from Basingstoke, which is twinned with Isengard and Mordor. Locally known as Gaysinblokes it is a marginally stylish buffer between the twin dumps of Southampton and Reading. It only features a swimming pool, two instantly forgettable colleges and a massive nightclub called Liquid which is populated by tattooed grannies dressed as 17-year olds.*

On the panel tonight we have Dept of Work and Pensions Minister Chris Grayling, the most self-righteous woman in the entire Universe Shirley Williams, Wee Dougie Alexander, the unpredictable but usual voice of sanity Jon Gaunt and…wait for it…Hugh Grant…

..right that’s right. Hugh Grant. This show has finally jumped the shark. An ugly-cheap-slapper-acquiring bloke who is notorious for trying too hard with high profile “girlfriends” to deflect the fact that he’s obviously gay. He appeared in some B movies. Years ago. Mug shot here, just for fun 🙂

The LiveBlog will also stay open for the bizarreness of This Week with Andrew Neil, and Michael Portillo. They are joined on the Sofa of Mediocrity by the crater-faced failed postie Alan Johnson and the pompous Max Clifford. Sylvia Syms is promised as an extra (from Ice Cold In Alex? Surely not!), and a political round-up from Guradian bore Nick Watt.

* Note to the bloke who emailed me last week about the description of his town – I’ve never been to these places and it’s only humour, eh? *It’s a laugh* Go shoot yourself. Slowly.

Question Time comes tonight from Birmingham; a post apocalyptic prison-city which was extensively remodelled in the mid 20th Century by Adolf Hitler and is located in a huge bomb crater somewhere in the Midlands. Highlights include nightmarish buildings, utterly miserable public transport and sadistic traffic systems. For this reason Birmingham has been designated an IKEA World Heritage Site.

LiveBlog commenters are kindly asked to leave sharp objects at the door. Your moderators accept no responsibility for injury or damage to nearby objects. Alcohol is virtually essential.

The LiveBlog will also stay open for the bizarreness of This Week with Andrew Neil, and Michael Portillo. They are joined on the Sofa of Mediocrity by Gisela Stuart MP; hindered by some people calling themselves “Michael Rosen” and “Trevor Beresford Romeo OBE” who all of you down wiv da kidz peeps will know as “DJ Jazzie B“. Plus a political round-up from Adam Boulton. Joy.

Question Time comes tonight from Aberdeen, a city noted for sheer dullness, grime, and the unbelievably irritating accent everyone has. The motto on the City coat of arms reads “any spare change for a cup o’ tea big man?“. Even moss dies there by dint of being too interesting for the city. Black and white movies are often shot on location in Aberdeen, as nobody needs to take out the coloured film.

You’d have to be a masochist want to watch this Question Time. On the panel we have Wee Eck Alex Salmond, Michael Moore, Diane Abbott, Lord Forsyth and Scotland’s first home grown billionaire Sir Tom Hunter. It’s going to be dreadful.

The LiveBlog will also stay open for the bizarreness of This Week with Andrew Neil, and Michael Portillo. They are joined on the Sofa of Doom by failed MP and race-hustler Oona King…a woman whose name has even spawned its own verb [example: “She was talking so much drivel she was oonaking“]

The LiveBlog will also stay open for the bizarreness of This Week, with Andrew Neil, Michael Portillo and Alastair Campbell. Expect the Blue Nun Bingo to be as aggressively competitive as ever.