In a gushing, slobbering, sycophantic piece of Hello style candyfloss on the BBC website Katie Connolly goes all Sylvie Krin over the Clintons and their daughter’s wedding.

Moreover, the Clintons are icons of a different, seemingly more youthful time in America’s history – a pre 9/11 era when the country wasn’t weighed down with wars, bulging deficits and billowing oil leaks.
Chelsea is a reminder of that time, and people feel invested in the life of that young girl who held her parents hands through their darkest personal days

The Clintons, of course, are part of a select few that belong to the BBC’s Royal Family (Arafat, Castro, Nehru, Tony Benn etc) who are always treated with reverence and their transgressions initially minimised then airbrushed out of the “narrative”.

If it was a Palin or a Bush daughter getting married you can be guaranteed there would be plenty of veiled (and not so veiled) sneers and quotes from vitriolic haters (think Thatcher) so, to redresss the balance, and sustain the BBC’s Royalty image, we need an image that will be helpful to all the peasants crowding around their TVs watching their “betters” act out the higher life in that glittering galaxy reserved solely for the great and the good…. 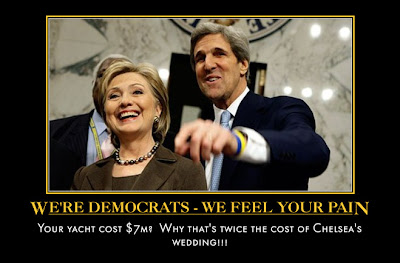 Just so you know,folks,like everyone else in these hard times the Clintons and the Kerrys are keeping things lean and mean….

The BBC Trust used Baker and McKenzie, an international law firm, to stop the National Audit Office disclosing figures that would allow ‘those in the know’ to make an approximate calculation of individual BBC staff’s paypackets. We’re going to know this soon anyway aren’t we?

I wonder how much more of the licence fee the BBC spends on suppressing things in addition to the hundreds of thousands forked out so far to bury the Balen report?

Another article by Neil Midgley in the Telegraph online concerns Jeremy Hunt and Sir Michael Lyons of the BBC Trust.

Before he became culture secretary and had the power to do so, Jeremy Hunt wanted to abolish the BBC Trust. Now that he has, he’s gone all soft and settled for changing the name a bit, from “The BBC Trust,” to the “Licence Fee Payers’ Trust”. He hopes that, and inserting a non-executive chairman onto Mark Thompson’s executive board, should be enough to address the troubles at the BBC.
Nobody has explained what specific changes Jeremy Hunt is after, apart from that the BBC Trust, or the Licence Fee Payers’ Trust, should be seen to be at arms length from the BBC.

However, as Sir Michael Lyons has secured a promise that the members of the new Licence Fee Payers’ Trust will still be the same old ex BBC members of the BBC Trust, the only way much change is going to happen is when, next year, Sir Michael’s term of Office comes up for renewal, and whether Jeremy Hunt replaces him with someone with very much longer arms.

It looks as though we’ll end up with the same ex BBC staff virtually investigating themselves, and at best giving themselves a token slap on the wrist once in a while.
Everyone agrees that the BBC is bloated, and needs to shrink. But it’s the bias, I’m afraid, that needs to be recognised and sorted out.

I have covered this on A Tangled Web but wanted to post it here as well.

British fashion designer Alexander McQueen has been found dead at his home. The poor chap, a doyen in the fashion world, was only 40 years old. His mother died last week.
Here’s the issue.
The BBC report on it here. He died. Just like that, seemingly.
However, as is reported elsewhere, he committed suicide. He hanged himself.
A terrible waste of his life but I wonder WHY the BBC seemed determined to avoid this simple detail? Were they trying to spare the feelings of the family? If so, why is such censorship not afforded to others in such circumstances? Might his gay background be in any way linked to this sudden BBC reluctance to report the facts? I don’t see the issue for the BBC withholding the reason for his death, can you?

Those who yearn for impartiality in BBC reporting can never close our minds to any side of a debate in our quest for fairness. For many years the bias has been pretty much one-way traffic – because it is inbred, it has become woven like fine silk through the cloth of reporting. So let us consider a contrary view.

Enter Stage Left Ben Bradshaw,  the Culture Secretary and soon to be ex-MP. On Twitter this morning he described the Today program as “biased” and “feeble” in its questioning of George Osborne.

“Another wholly feeble and biased Today programme rounded off with a fawning interview with a Tory pundit!!”

Earlier in the week he said, again via Twitter, that an interview with Shadow Schools Secretary Michael Gove was “disgracefully feeble”. Obviously feeble is his new favourite word, but leaving aside my view that Twitter isn’t an appropriate medium for a senior member of HMG to be sounding off on any issues, let’s examine in depth the points raised by the ex-BBC chappie.

Except there aren’t any.

To start with Evan Davies was fair by all accounts, but even if that wasn’t true, if the Left are to begin throwing accusations of bias in the run-up to losing the election then bring your evidence to the table and we will all listen fairly. Unsubstantiated Twitterings don’t cut the mustard.

It was a magical moment and, of course, the BBC captured it.

A 13-year-old Indian school girl has addressed world leaders during the inaugural session at the UN Climate Change Summit in New York.
During her speech, Yugratna Srivastava from Lucknow appealed to the world’s leaders to do more to combat the effects of climate change, asking “is this what we are going to give to our future generations?”

But later the BBC, wishing to be balanced, reported that not all the leaders were impressed…

Czech President Vaclav Klaus sharply criticized a U.N. meeting on climate change on Tuesday at which U.S. President Barack Obama was among the top speakers, describing it as propagandistic and undignified.
“It was sad and it was frustrating,” said Klaus, one of the world’s most vocal skeptics on the topic of global warming.
“It’s a propagandistic exercise where 13-year-old girls from some far-away country perform a pre-rehearsed poem,” he said. “It’s simply not dignified.”
……
Klaus said there were increasing doubts in the scientific community about whether humans are causing changes in the climate or whether the changes are simply naturally occurring phenomena.
But politicians, he said, seem to be moving closer to a consensus on climate change.
“The train can’t be stopped and I consider that a huge mistake,” Klaus said.

Whoops – sorry! That comment from the Czech President came from Reuters…couldn’t find it on the BBC – I wonder why?

As has been suggested on another thread, it really is time that the BBC linked to B-BBC in order that a sense of balance be provided to licence-payers. Here is a thread for your suggestions as to how you reckon we can achieve this….thoughts?