It seems like a good moment to update David’s excellent post below about the ongoing voicemail hacking change my password? Meh, why bother? nonsense in the news at the moment.

Compare and contrast what the BBC sees as a priority – indeed the Top News Story: 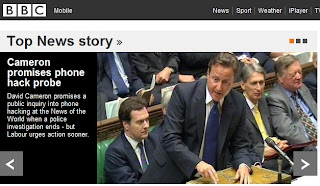 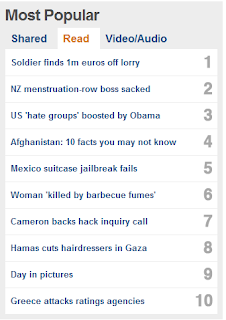 The BBC want to use this story to discredit both Rupert Murdoch and the Prime Minister even though it is only alleged at this stage (and not yet proven) that in 2002, five years into a 13 year period of Labour government, journalists working for a Labour-supporting newspaper edited by a someone who was a close friend of the then Labour Prime Minister Tony Blair, and who was also feted by the then Labour Chancellor and later Labour Prime Minister Gordon Brown, illegally accessed the voicemail of the missing Milly Dowler. Everything still remains allegation and speculation.

Now the BBC (and specifically Peston) want to derail Rupert Murdoch’s consolidation of what he already owns and Nick Robinson has the knives out for Andy Coulson.

The problem for our State broadcaster, as shown by the screenshot, is that the public are preferring to read BBC stories about female biology in New Zealand and how to escape from jail in a suitcase. Even the Most Read entry at 7 is a rebuttal by Cameron.

You might think that people are concerned about the crime but don’t buy into the convoluted attempts to smear Murdoch and Cameron, eh?

Did you catch sneering Humphyrs interview with David Cameron here? Notice how former BBC idol, Saint Vince, is now restored to heroic status by Humphrys because of his musings on the need for “liberal” laws on immigration. Cameron was constantly bated by Humphyrs on this, just as he was constantly derided on the “Senior/Junior Partner” lines. Shortly afterwards there was a fawning interview with Jack Straw in which he was allowed to get away with the wild claim that Labour has not gerrymandered the English constituencies for petty Party advantage without so much as a whimper of comeback from the Today poodles. More and more Today has morphed into the last bastion of the Labour Party. At our expense, of course.