Only the BBC could call an article ‘Nine charts which tell you all you need to know about North Korea‘ and then fail to mention communism, socialism, or even the North Korean Marxist ideology ‘Juche’ even once.

It’s completely normal for muslims in Britain to celebrate Christmas. Don’t even think about questioning that. If you go to a mosque on Christmas day they will probably be singing carols and marvelling at the christmas tree.

Nobody is surprised that Mary Berry’s Christmas Party featured a muslim guest, because we have come to expect such things. Reality and ideology clashed though because almost all of the recipes included either alcohol, or pork, or other non-halal meat. As a result poor old Adil couldn’t eat much more than a canape at the party.

In these dark days, where we have to worry about “possible Russian interference in the 2016 Brexit referendum“, perhaps we should look at other votes too?

Mo Farah has won the Sports Personality award. Did Russia try to exert influence on the vote in order to subvert democracy?

Well just look at this damning evidence. Suspicious Kremlin linked Twitter bot accounts have posted many tweets about Mo Farah. Perhaps we should have a second Sports Personality Vote? Also, where’s our £350m?

When does Mo Farah race? Live stream information and more from London 2017 ahead of his final race https://t.co/ey60FgvqFl #Russia

Our mission continues to be to provide information that can be trusted around the world. It’s a great liberal aim in the best sense: a public service.

Can you learn anything about someone from the people they are friends with? 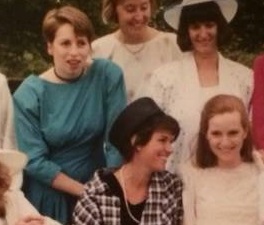 Jane Wells is the daughter of Sidney Bernstein ‘the dominant influence on the growth and development of commercial television in Britain’ and is the founder of 3 Generations, ‘a non-profit organization that documents stories of human rights abuses through film’ and their output is just the sort of social justice propaganda you’d expect.

Lise Mayer is the co-creator and writer of BBC sitcom The Young Ones and her sister is Catherine Mayer, co-founder of the Women’s Equality Party.

Two prime examples of the liberal elite, and both life long friends of our Fran (even today they are all Facebook friends). Does it tell us anything about her? Maybe. You decide.

BBC appoints Fran Unsworth as next head of news

What do we know about about her?
Not much. She has a very small public profile and has worked at the BBC her whole career.

Your guess is as good as mine, but it certainly sounds a lot like the type of rhetoric we hear from certain activists. The rest of the video talks about *cough* diversity *cough*. Make your own minds up on this one. Perhaps she thinks unbiased reporting is very important despite her strong left wing views…let’s see…

I’m not sure what’s happened to Alan (Maybe the TV liecensing people took him to their dungeon) and I don’t have the admin rights to remove the old pinned thread, but here’s a new one for all your BBC bias needs.

On October 17th I wrote that in November or December this year, inflation would pass the 3% threshold needed to trigger a letter from Bank of England chief Mark Carney, predicting:

Carney’s letter will be deeply pessimistic about Brexit, so the BBC will report it as the top story with two or three articles of “analysis” where they cherry pick some other statistics to mislead the nation once again. Several days later Laura Klueless will ask the chancellor some stupid questions and whatever the answers are the BBC will present it as being further proof that Brexit is destroying the economy.

We are still awaiting the letter, but the BBC have done exactly what I said they would so far. 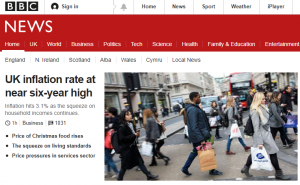 My favourite analysis/propaganda from these articles is: “The price of the festive grocery shop has spiralled this year…Brussels sprouts are up 8.4%”. So what are they now, 10p to 20p more expensive? Better cancel Christmas. A close runner up is: “What is the point of capitalism?”. Gosh!

Just wait for the letter; will my remaining predictions come true?

Yes it’s 6am on Monday morning and the propaganda machine is in full swing.

This time it’s a BBC survey which tells us that Two in five women in the UK say they have experienced unwanted sexual behaviour at work. Excellent news. This marks a huge drop since they reported a BBC survey several weeks ago: ‘Half of women’ sexually harassed at work. Or maybe the survey data is just total junk and it’s another manufactured story created by an organisation more interested in activism than journalism?

President Trump is right….there needs to be new thinking.

The BBC’s Chief International Correspondent Lyse Doucet around 49 seconds into this video.

It can’t be a fact because I can just as easily say, “we shouldn’t change our thinking” and there’s no way to verify the truth of either statement. But I thought the BBC didn’t offer opinions?

The BBC live blog on the Jerusalem story is currently being run by Becky Branford (who is a revolutionary marxist) and Mal Siret.

Yes, that’s the same Becky Branford who opposed Israeli plans in East Jerusalem, and the same Mal Siret who celebrated as “a stunning victory” the news that Jeremy Corbyn supported the Palestinian right of return. 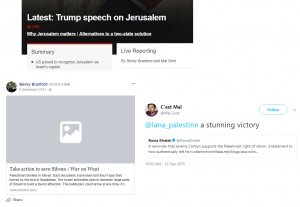 Edit: Now they are also posting updates from Suzanne Kianpour who writes from Washington.

That’d be this Suzanne Kianpour.

BBC News itself is impartial and does not offer opinions

How then can they have an article which is entitled Prime Minister’s Questions: The verdict, featuring videos of BBC presenters giving their verdicts?

"It was a time for forensic questioning" says @afneil on #pmqs but Mr Corbyn gave "a series of rather short speeches, a couple of which did not ended in any kind of question at all" #bbcdp pic.twitter.com/ZXj9kbBNJo

"More heat than light from both of them, it was not either of their finest hours" @bbclaurak on Brexit issues at #pmqs pic.twitter.com/zq9m4zpnoY

Perhaps Oxford need to update their thesaurus, because it wrongly claims that ‘verdict’ is a synonym of ‘opinion’.

According to Willis, claiming that we are “somehow unique” is a “myth” spread by people like Churchill, who claimed that we are an “island race”. Perhaps he should read Churchill’s ‘Birth of Britain’, because Churchill never supported such a silly myth, and I seriously doubt that anyone ever did. It’s obvious to anyone that we have a lot in common with people in many other places, in many important ways. That isn’t incompatible with a national identity. Willis’ myth itself is a myth, invented to mock people who oppose mass immigration. All the old history books speak at length about Roman, Norman, Celtic, Neolithic, Anglo-Saxon, and Viking invasions. In some cases they even over-emphasise the impact of these events, the exact opposite of the “myth” the stupid British racist public are supposed to believe.

Churchill on the Bronze Age

Britain…as a whole was a backward country by comparison with the
Continent; primitive in its civilisation, stagnant and passive in its life, and
receiving most of what progress it enjoyed through invasion and importation
from overseas.

Bamboozled by Brexit? Don’t worry, remainer Sofia Bettiza will “explain”. The video largely consists of people negatively affected by Brexit though, and doesn’t have time to explain much. Is she biased? Yes: Sofia Bettiza – “Britain, please don’t Vote Leave!”

President Donald Trump has dramatically scaled back two public outdoor parks, or national monuments, in Utah. The policy is likely to provoke lawsuits from Native American tribes and environmental groups. But it will be welcomed by ranchers and business interests who view such monuments as federal land grabs.

You don’t need me to tell you the answer. I think if everyone in America supported Trump’s decision except one person, they’d still go with headline 1 and highlight that person’s views.