A whole article on the transformation of New York from 1970s bankrupt Democrat hell-on-earth to naughties Republican safe place to be, and only one, oblique, reference to Giuliani:

“Maybe some of the credit is courtesy of Mike Bloomberg, the coolly pragmatic tycoon and philanthropist, recently re-elected mayor after spending $60m (£34.3m) of his own money on his campaign.

Unlike his feisty predecessor, Rudy Giuliani, this mayor has a soothing style and is more willing to listen to opponents.”

Bloomberg is a crypto-Democrat, so he is only a little bit evil, it seems, unlike the wicked Giuliani, who locked up criminals (the horror!).

Australia, Iran and Arabia have obesity problems, but in the US, it is a reflection of ideology:

“Yet the US obesity problem has particular resonance, perhaps because it is reflection of the modern way of life the country typifies, with its junk food and technology of convenience.”

Just what part of anti-American bias does Mr Davis not understand? If “The US is one of the worst affected countries in the world, but in percentage terms not the worst”, then surely it is not some elusive American culture of imperialist technological rape-the-world laziness that is responsible?

Note also the non-sequitur – “Back in 1960, a 250-pound (113kg) American Football player was considered a giant. This year, more than 550 players weighing 300lbs or more were on NFL training camp rosters.” Look at the camps – I suspect that the 300lbs is pure muscle, and hardly the place where fatties train to be elite footballers, but never let the facts get in the way of a good story.

Update An anonymous commenter finds those trans-Atlantic fatsos – here they are in the UK in June 2005: 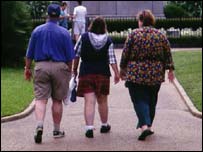 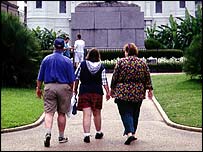 (Haloscan deletes comments after a few months – thanks Anon!)

So, the government has dropped the test for hate-preaching imams. Afraid? Be very afraid:

‘The Home Office said it hoped that a tougher English language test for foreign-born religious leaders would automatically mean they had a knowledge of British life.

An official said: “If someone has to take a test showing showing they are a confident user of English, both written and spoken, they will have inevitably learnt about life in Britain. They will have read newspapers and listened to the BBC.”’ (emphasis added)

BBC special reports are an interesting exercise in teasing out the stock-standard Guardianista/Islington mindset of its reporters. In the midst of a fairly sensible report (if full of journalistic clichés about little children and mothers wailing over bombed houses), the guard drops, and the soft Apocalypse Now anti-Americanism seeps out:

“As the people of Baghdad tried to make do with little power, and in some areas no water, coalition officials were settling into Saddam Hussein’s marble-floored palaces, complete with their chandeliers, and gold-tapped bathrooms.”

Really? I recall reading that life for US soldiers was not that flash – here is a detailed rundown of the bases.

Regardless of marble floors and gold taps, if you only have electricity because you have a back-up generator, any amount of tasteless dictator chic doesn’t make up for the privations.

What does the silly Ms Hawley want anyway? The soldiers could donate their back-up generators to power up one civilian city block (allowing those inside to watch al-jazeera broadcast films of the death of Margaret Hassan), but without any power, Ms Hawley would soon be whining that the US soldiers were not doing anything to protect those same TV watching civilians from being killed by al-qaeda bombs.

Migrants or illegals? The BBC house style is all over the place:

Correspondents say Greece is on a major people-smuggling route from Asia and scores of illegal immigrants are detained every week.

On Friday, Greece signed an agreement with Iran, Pakistan and Turkey to fight organised crime and the illegal traffic of immigrants and drugs.

Earlier this month, Athens announced an amnesty for up to 500,000 illegal immigrants.

In October, Greece was criticised by Amnesty International for its treatment of minorities and foreigners trying to enter the country.” (emphasis added)

BBC Online comes to the party on Sydney:

“Thousands of white men attacked people of Arabic and Mediterranean background on a Sydney beach the previous weekend.

The violence was apparently sparked by an attack on two lifeguards.

It led, in turn, to two nights of violence and vandalism by groups of men of Middle Eastern or Mediterranean appearance.”

The earlier stages in the evolution of this file background can be found here.

Mean spirited, perhaps, to laugh at typos, but this is unintentionally rather amusing – BBC News Online have stopped their fatuous “Allies on trial“ online poll (just as the no votes were gaining ground), and have posted bar graphs of the results instead.

I knew we were bad and all, deposing poor innocent Saddam, but breaching “the convention on the methods and means of WELFARE” is beyond the pale!

Update:It’s taken the Beeboids until Sunday afternoon to correct their typo – so much for sub-editing and quality control!

Intrigued by Dan’s comments on the people smuggling issue (read comments), I clicked again on the BBC article I had hyperlinked.

It has been changed! The headline said words to the effect “international migrant smuggling ring” (and “people smuggling” was certainly not prominently displayed in the first paragraph). I know that there is such a thing as a screen capture but don’t know how to do it (nor, naively it seems, that I should do it).*

Would readers who are more tech savvy than me see what they can do? There is a way of finding out “what the web looked like” historically or something like that.

Is Dan the mole?

*”People smuggling” most definitely was not the headline, or I would not have posted in the way I did. The front page had a link to “migrant smuggling gang smashed”, and it was the rather curious and clumsy “migrant smuggling” that got me to click through anyway (the sniff of bias was obvious). In any event, google once again shows that “migrant smuggling” very much is BBC preferred house style.

…or so hits to go. 1,000,000 will happen while I am asleep Sydney time, so preemptively, congratulations and thanks to the indefatigable Natalie for all of her hard work in “keeping the bastards honest”.*

*Australian political slang (see Don Chipp if you are interested).

PS Remember to vote – the good guys are gaining ground!

Very subtle, but this on 14 December:

“The large-scale violence in Sydney started on Sunday, when thousands of young white men attacked people of Arabic and Mediterranean background on Cronulla Beach – apparently in revenge for a recent attack on two lifeguards.

Many of the rioters had been alerted to congregate in the area by receiving mobile text messages.

The fighting then spread to other parts of the city, injuring more than 30 people, including police officers.

The violence continued on Monday night, apparently in retaliation, despite calls for calm and ethnic tolerance by Prime Minister John Howard and other senior figures.”

changes to this on 15 December:

“The large-scale violence in Sydney started on Sunday, when thousands of young white men attacked people of Arabic and Mediterranean background on Cronulla Beach – apparently in revenge for a recent attack on two lifeguards.

Many of the rioters had been alerted to congregate in the area by receiving text messages.

Apparently in retaliation for the violence, groups described by police as having “Middle Eastern or Mediterranean” appearance were involved in two nights of violence and vandalism.

“Staged” would be better than the circumlocution “apparently were involved”, but this is a real advance. Don’t worry about the somewhat circuitous description – that is the local Sydney semi-official (police and reputable press) way of describing them.