Here we go again on “militants” – this time in Afghanistan:

‘A high-ranking Afghan government official, who did not want to be named, told the BBC that any reduction in the number of US troops would affect morale in the country.

“This will help the Taleban and will have a negative impact on security,” the official said.’

Notwithstanding the official’s description, the BBC staff writer (who wrote this, presumably after speaking to “the BBC’s Andrew North in Kabul”) insists on calling them “militants”. An impartial broadcaster would call them “Taliban and al-qaeda fighters/militants” (which would be accurate), but we all know where that would lead the reader, given their pretty poor “branding” in the west (although it would appear “al-qaeda” can sometimes be used – I would like to see the style guide on this however)…

Update Why couldn’t this headline be “Hamas leader shot dead“? “Militant” is so clumsy.

If it is not Americans, it’s Israelis.

(None of this somewhat lighthearted posting is meant to detract/distract from Kerry’s very serious point about the persecution of Christians in Iran. Be sure to read it if you haven’t already.

Reader Tom has a look at the coverage of Saddam’s “Poor me!” outburst.*

*From comments, but posted in the interest of archiving (well, at least as long as google is happy to host all of this stuff) as haloscan deletes comments after a while.

The old Dr Who:

“Colin Baker’s Doctor is a vain and self-absorbed bully, although he does manage to wrest some charm from the character. His assistant Peri is written as a squawking American, forced by an apparently xenophobic wardrobe department into a range of candy-coloured, cleavage-enhancing T-shirts, vast bermuda shorts and high heels, but she too grows on you.”

The new Dr Who discussed here.

This is the front page for BBC Online’s country profiles.

Look at the photos:

What would Edward Said say? 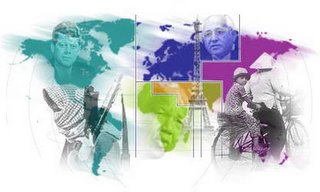 Some days ago, there was a lively discussion thread on Afrocentrism at the BBC.

A BBC Online article is supposedly about teaching history of the Empire in schools:

MPs and historians were among those who contributed to the Fabian Society’s review on “Britishness”.’

Bear with me here – what photo would you think might be posted? Queen Victoria? A grand durbar? How about an entirely neutral picture of shackled black slaves being whipped (admittedly by another black man). 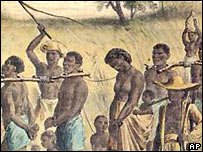 The picture caption: “Schools are being urged to study the history of the British Empire”

That’s the British Empire for you folks (and the “key to UK life”) – slavery.

The “See also’ sidebar has:

I note the jpg alpha name is “slaves” – and presume that this is the keyword in the BBC image library used to search. The same photo appears in the “black history” article.* Talk about patronising – every time black history is discussed at BBC Online, it would seem the editor types “slaves” into the image library search box.

*The caption there is “Lessons on Afro-Caribbean history often focus on slavery” – which unintentionally states the PC worldview – black = slavery.

…used to be a feminist issue. Now the BBC has found another reason for it – slavery.

Wouldn’t ya know it – when those darned Yanks are not bombing innocent kite flying Ba’athist secret police, their slaving past is apparently making people fat:

“Back in the 1850s more than 100 slaves worked the cotton fields on the 1,250-acre Rosswood farm, one of many such plantations along the Mississippi Delta.

Then the working day was long and arduous, the food basic but filling – gumbos, or stews thickened with okra, cornbread, beans and fish from the Mississippi.

But the doctor says the dietary legacy of those times persists.

We want our schools and our communities to buy into the idea that we must change our environment, but that will not happen overnight.

“The taste of the individuals in this area comes from their experiences during slavery, the food that is eaten is of poor quality and rich in calories.

“The food that is eaten is highly satisfying, highly filling but the food… that they eat in general is not balanced.”

Something is slightly odd in this article – if the diet was “gumbos, or stews thickened with okra, cornbread, beans and fish” (sounds like healthy unprocessed food) 150 years ago, and the diet now is Burger King (implied by photo) and “mud pie, … cajun fried pecans, sweet potato crunch, … fried shrimp and catfish” (which does not sound like oppressed slave food – with the exception of the catfish), what gives?

Is this just another case of a Beeboid finding an expert who will tell him what he wants to hear? Denying the agency of black people and painting them as mere objects of historical processes (which this article comes close to) can be racist too.

A commenter pointed out this Spiked article by Ben-Ami – a more helpful discussion of the issue.

The BBC meme du jour appears to be fat America (I note the trans-Atlantic lardarses appear not to have made it as far as Mississippi).

Update I clicked “Publish” too soon – our travelling friends are now US teenagers!

Apparently, acording to the headline, the UK economy is “remarkable”. Rub your eyes and read on:

“Macroeconomic stability in the UK remains remarkable,” its report said.

But, it did warn that the Chancellor needs to rein in spending to stop budget deficits widening further…

It added that Mr Brown’s success in sticking to his golden rule – of borrowing only to invest during the economic cycle – depended on “a precise dating” of the cycle.

“The adjustments in the definition of the cycle have proved an unhelpful distraction from the more important considerations of what a sustainable fiscal policy is,” the IMF said.

In July, Mr Brown declared the current economic cycle began in 1997 rather than 1999 – a move some experts said was effectively moving the goalposts for his own rules.

They swooped on the change, accusing Mr Brown of “cheating” to avoid breaching another strand of the golden rule, namely on balancing the budget over the economic cycle.’

The right bar has:

The headline is contradicted by the article. Strange.

Well, if Gordon Brown says so and you have a BBC show to plug:

“I hate the idea of creating a committee or a quango for this purpose, but a focussed group with a clear objective to create a new blueprint for entrepreneurial flair in Britain wouldn’t be such a bad idea.

Let’s bring together the relevant government bodies, private companies, leaders in education and gurus from all walks of life and see if we can find a way of channelling all this energy and interest in business into something productive for future generations.

But if you want something exciting or even sexy to happen as a result, my advice would be: put an entrepreneur in charge.

Catch up on Peter Jones’s £175,000 Dragons’ Den investment in a new publishing venture in a special programme featuring the original contestants from the Dragons’ Den one year on: Dragons’ Den: Where are they now?, 7pm, BBC Two, Wednesday 21 December.“

Ashley Pomeroy notes the Beeb’s disgust with the emancipation of the huddled masses of the estates from sharecropping by that wicked Thatcher – or the right to buy.

On the left is the news report from the time – read it and weep at how neutral-ish it seems compared to now.

Look at the blue boxed editorial – and wake up:

“Many people who bought their homes under Thatcher’s “Right-to-Buy” scheme are now struggling to pay for the upkeep of their properties which are no longer maintained by local authorities.

The controversial scheme has also dramatically reduced the number of available council homes and there is now a huge shortage of social housing across the UK.

Since the introduction of the scheme in 1980 there have been major changes to the size of the discount tenants are eligible for. The maximum discount is 60% of the home’s value or £38,000, whichever is greater.

In many areas of the UK the scheme has been abused and there are now strict regulations about when tenants can resell their property after purchasing it at a discount.” (emphasis added)

If they can’t keep up the payments, they can always sell.

Pity the poor local authorities – forced to lay off slack bloated civil servants who batten off the working taxpayer when the work of telling tenants what colour to paint their homes dried up. I suppose those local authority workers probably did help stem the tide of pebble dashing and gnomes, marks of aspirational Thatcher voting Little England in White City.

This whole lack of affordable housing malarky is pure nonsense – sure housing is expensive in the UK, but the great majority of people do have somewhere to live. “Social housing” is just another euphemism for soaking the working middle class to subsidise those who slacked off at school.

“Abuse” would appear to be what my aunt (who works two jobs) did with her ex-council house – mortgaged it to buy an apartment in Spain. Oh these poor workers, seduced in their false consciousness by the wicked capitalist system…when will they learn that their betters in Islington have worked out how best they should live?