As a project for the weekend I’ve decided to make a start on the World’s first Beebish/English dictionary. My hope is it will eventually prove an invaluable tool for the audience to better understand the BBC’s news reports – or that I might be able to flog it to the Beeb as a training resource for bucket loads of cash.

I have a few entries below already, but I’d be grateful for suggestions of others* that should be included.

* with links if possible.

For all the distaste of the calls to Sachs there’s been some understandable frustration here that it’s this issue the public and papers have got upset about, rather than the constant bias.

This, though, would seem to suggest the result is the same – a lack of trust in the Beeb that can’t help but hit its unwarranted reputation as a impartial source of news:

The PoliticsHome Phi5000 Public Opinion Tracker, powered by YouGov, consists of a politically balanced panel of 5000 voters across the UK… [and] has tracked public perception of a variety of institutions on a daily basis. Since records began, the BBC has been the country’s best loved institution, with an average net approval rating of 30… The BBC’s approval rating, however, has plummeted this week as the Ross/Brand affair has dominated the media. In just four days, it has fallen a huge 24 points to only 6.

My favourite bit, though, bearing in mind the complaint that this has all been whipped up by the press, is this:

This places the BBC for the first time below ‘Broadsheet newspapers’

There’s also this, which will surprise no one: Among Conservative supporters (who initially had a lower opinion of the Corporation), the BBC now has a negative net rating (-3).

General BBC-related comment thread! Please use this thread for comments about the BBC’s current programming and activities. This post will remain at or near the top of the blog – scroll down for new topic-specific posts. N.B. This is not an invitation for general off-topic comments, rants or chit-chat. Thoughtful comments are encouraged. Comments may also be moderated. Any suggestions for stories that you might like covered would be appreciated! It’s your space, use it wisely.

We know that, as a matter of editorial policy, the BBC doesn’t run opinion polls commissioned elsewhere as news stories in their own right (except for the odd exception). It never occurred to me, though, that its problem with them was that they could be too accurate. This could be the case, if the ComRes polls for the Daily Politics programme are anything to go by, however. Political Betting has the story, but here’s the key passage:

For the Daily Politics polls have one fundamental difference compared with the standard ComRes voting intention surveys – there’s no effort to ensure a politically balanced sample which almost inevitably means that its skewed towards Labour supporters.

Thanks to Eric in the comments.

An insight into the editors’ reading habits

As a key plank in the BBC’s efforts to ensure accountability and engage their audience in the digital age, the Editors blog has done sterling work this week, with a single post about Manuelgate by a Radio One editor suggesting we’re over-reacting. As someone in the comments put it, Answering all the questions you never asked.

Interesting, too, is the ‘BBC in the News’ sidebar on that page. As we know, the BBC has been in every newspaper all week, but where do the majority of the links come from? That’s right, folks, the Guardian and the Independent – the national papers with the lowest circulation figures in the land, outside Broadcasting House. 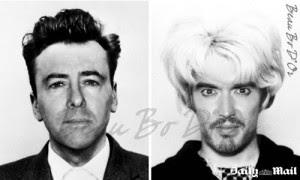 The BBC draws a line under radio show – or rather it hopes to. Given the front pages today, the fact that there’s an Ofcom investigation continuing, and the fact that Ross remains in a job, that seems unlikely. But should it? Well, what has the BBC actually done?

Russell Brand went, but was Mark Thompson even back from his holiday when that happened? Anyway – nothing to do with the Beeb.

But what about the Controller of Radio 2, Lesley Douglas, who also quit. That’s altogether more significant. But the decision to go was mine and mine alone, she said. Again, nothing to do with the Beeb.

In fact, has the BBC or the Trust done anything? Well, four days after the story broke and they’ve racked up more than 30,000 complaints Ross has been suspended for three months. And they’re going to do a review, I think.

The important thing to remember is none of it happened because of BBC management or the Trust, which laughably claims to represent your interests. It’s all down – as the Beeb hasn’t tired of reminding us in recent days – to the Mail on Sunday.

* The picture I’ve stolen from Anorak, which also has this for those that want a laugh.

Question Time watch (because I’m not going to)

Frankly, I can’t be bothered to stay up for it, but the comments of those who do will be appreciated. Things to look out for will obviously include how well they labour the fact that one of the two Republicans they’ve allowed on is the grandson of Nixon (after all, why else was he invited) and how the audience is made up. Since they’re only doing this one episode in the US, I know they’ll want to have made sure there’s a balance of Republican and Democrat supporters… 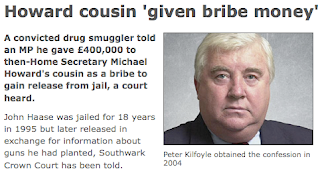 It’s not often nowadays that the Beeb breaks really big news so when I saw this, among the top stories on its website’s Politics page, I sat up and took notice: Former Conservative party leader Michael Howard’s cousin is bribed with £400,000 while Howard is Home Secretary, and a convict is released on his orders! It may have been a few years ago, but this is hot stuff. But why is no one else reporting it, five hours later?

Hang on, how about this – a report in the Liverpool Echo that, yes…

Labour MP Peter Kilfoyle told the jury as part of the statement Haase, 59, said he had bribed both Michael Howard and the men’s customs handler Paul Cook.

So it looks like this story has got legs after all. But, wait. What’s this bit that I don’t remember seeing in the BBC report?

He told the jury he felt the Michael Howard bribe claim was unsubstantiated.

Ah, so that will be why no one else picked up on it. Good ol’ Auntie.

The events of the last two weeks happened on my watch. I believe it is right that I take responsibility for what has happened, says Lesley Douglas, which strikes me as admirably straight-forward, so no criticism from me.

I had to go to Sky to get that quote, though.

General BBC-related comment thread! Please use this thread for comments about the BBC’s current programming and activities. This post will remain at or near the top of the blog – scroll down for new topic-specific posts. N.B. This is not an invitation for general off-topic comments, rants or chit-chat. Thoughtful comments are encouraged. Comments may also be moderated. Any suggestions for stories that you might like covered would be appreciated! It’s your space, use it wisely.