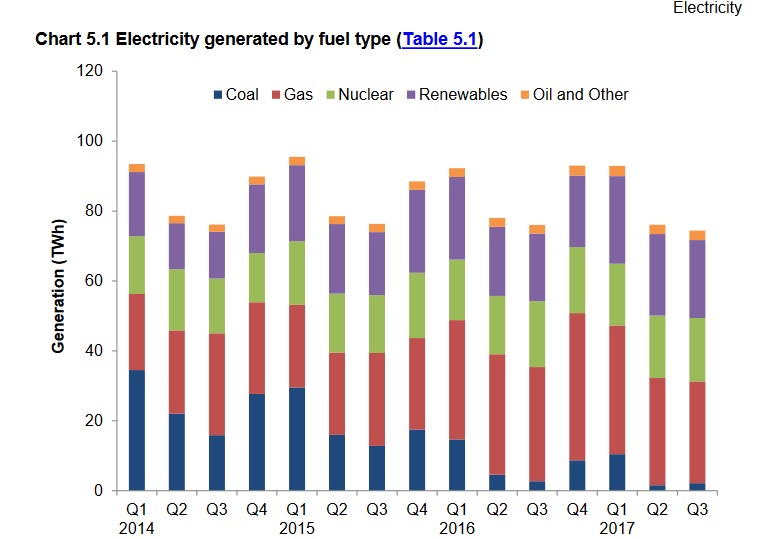 Great excitement!!!!……renewable energy production has overtaken coal!!!!!   Wow, you could have knocked me down with a feather as I heard the unbelieveable news from the doleful voice of the BBC’s devout high priest of climate change, Roger Harrabin, as he breathlessly intoned the good news in the manner of a Spanish Inquisition torturer insisting with dread enthusiasm that the earth is flat and that you must believe him and renounce your previous disbelief!

The UK has achieved its greenest year ever in terms of how the nation’s electricity is generated, National Grid figures reveal.

In June, for the first time, wind, nuclear and solar power generated more UK power than gas and coal combined.

British wind farms produced more electricity than coal plants on more than 75% of days this year.

So coal is down and out and renewables are stepping in to take its place?  That’s the BBC message they want you to believe.  Naturally that’s rubbish.

First, coal, after the government forceably cut its use as a fuel for generation, now accounts for a mere 2.9% of our electricity production….so hardly a surprise that renewables have ‘overtaken’ coal…or perhaps more accurately coal has undertaken renewables.  But have renewables surplanted coal as the BBC implies, the BBC pushing solar and wind?  No, gas generation was massively ramped up to fill the hole left by coal.  And of coure there’s nuclear….and the one renewable the BBC fails to hype in its bulletins…the controversial biomass.  And of course after all the headlines about renewables on a surge the BBC quietly admits….

Renewables overall – including wind, solar, biomass and hydropower – beat fossil fuels for only 23 days of the year.

And here’s the reality….solar and wind may have increased slightly but are in no position to replace gas and nuclear…and from the figures renewables may generate a good share of the power but the use is of non-renewable as wind and solar are produced at times when people don’t need power or is not produced due to adverse weather conditions. 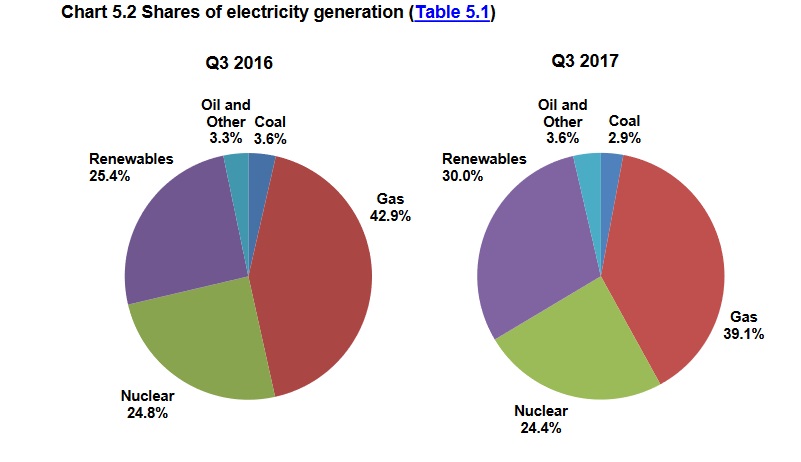 Listening to the BBC’s news bulletins today you’d be forgiven for believing that wind and solar were rocketing in use and had replaced coal when the truth is that it is gas that has replaced coal, and nuclear and gas are still the main providers.  The BBC bulks out its sermon with messages from the converted…

Dr Andrew Crossland from MyGridGB and the Durham Energy Institute said: “The government has focused on reducing coal use which now supplies less than 7% of our electricity.

“However, if we continue to use gas at the rate that we do, then Britain will miss carbon targets and be dangerously exposed to supply and price risks in the international gas markets.”

He added that “refreshed government support for low carbon alternatives” is now needed to “avoid price and supply shocks for our heat and electricity supplies”.

Emma Pinchbeck, executive director of Industry body RenewableUK urged onshore wind to be developed across the UK in an “ambitious sector deal with the off shore wind industry” that could help secure a “golden age for renewables” in 2018.

Nothing new in the BBC ‘nudging’ the news to ensure we get the message it wants us to believe…and indeed its reporting from the US about the arctic weather they are having right now is a case in point as the extent and seriousness of the issue was played down by the BBC as half the US was engulfed in an arctic blast and is having record cold temperatures and snowfall.

Snow emergency in US city Erie after huge storm

A record-breaking snowfall of more than 60 inches (150 cm) has hit the Pennsylvanian city of Erie over the Christmas period, with even more said to be on the way.

The city has declared a citywide emergency as a result of the storm, which began on Sunday.

Hmmm…but that’s not why it is ‘extreme’ is it?  Odd how this is just ‘weather’ and not ‘climate’ whereas record heat would be ‘climate’.

The BBC finally admits the truth in its headline today….but curiously no mention of climate change at all…

Brutal cold spell sets record lows across the US

Bitter cold continues to blanket the northern United States and Canada as forecasters warn that the deep freeze will continue into the start of 2018.

8 Responses to Curb your enthusiasm