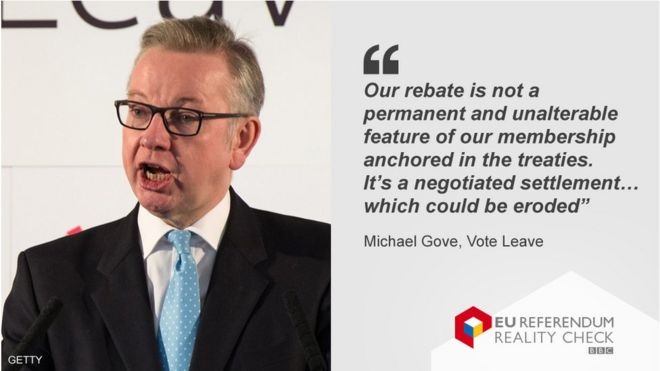 Talking of the infamous £350 million the BBC always likes to say we don’t send the EU any actual money…and that the UK has a veto over any decision to axe the rebate should the EU, as would be likely, especially if we were to ‘rejoin’, thus…the rebate is safe and can’t possibly be included in any discussion on how much we pay the EU.

Strange then that the EU wants to hold onto our rebate.…how can they do that if they don’t get paid it?….

Europe is threatening to keep back Britain’s final rebate payment of €5 billion as part of the negotiations over  the Brexit bill, The Telegraph can disclose.

Senior British sources said that  negotiations over the bill, which the EU sets at €60 billion (£53.6 billion), had still not settled whether the UK would receive the €5 billion (£4.46 billion) payment as part of the final settlement when it leaves the EU in March 2019.

“There is a problem here, and the issue over whether the EU will pay us the 2018 rebate has not been resolved,” the source in Whitehall confirmed.

No veto then?  The EU was always likely to reverse the rebate, veto or no veto, whether we voted to stay or go….something the BBC doesn’t want you to understand.  You can guarantee it will go if we are forced by the Remainders to go cap in hand to the EU begging to be let back in….they will take us for everything they think we owe them and then add on the defunct rebate on top as well as imposing some draconian rules upon us in the City and on trade until we ‘prove’ our commitment to the cause and the Grand Project.

The BBC’s Reality Check tells us…

Reality Check verdict: He’s [Gove] right that the rebate is not a permanent feature of EU membership, but the UK has a veto over the process that would scrap or reduce it.

The level of the UK rebate is decided every seven years, as part of the EU’s long-term budget, the Multiannual Financial Framework (MFF), which is negotiated by the EU leaders.

The long-term budget determines EU spending levels and priorities and it has to be approved unanimously by all 28 EU leaders.

Last time, as part of the 2014-2020 budget negotiations, the UK rebate was preserved. It will remain in place in the current form until 2020.

When the EU starts to negotiate the next MFF, the rebate will certainly be on the table again. Many other EU countries would like to see it scrapped or reduced.

But with the EU leaders required to approve the MFF unanimously, the UK could use its veto to stop the erosion of the rebate.

Except is that right?  The EU will introduce majority voting on this as soon as it thinks it is necessary or find someother way around it…Cameron already surrendered the veto for majority voting on many issues last year and told us it was a great success by him giving away our veto.

BRUSSELS has today unveiled plans to abolish all member state rebates fuelling speculation that eurocrats were preparing to raid Britain for more cash if it voted to remain in the European Union.

And consider that the EU can always find a way of increasing the total we ‘owe’ the EU so that when the rebate goes through we still pay them what they want….like the supermarket inflating prices and then telling you you have a bargain when they ‘drop’ them…or ‘Britain could be put under pressure to compromise elsewhere if it wants to keep the rebate, European Commission sources say.’

The EU is no-one’s friend….it is about filling  its own pockets with our gold and a massive power grab for the unelected and unaccountable EU superstate that can change the rules at will to justify and licence its every unjust and illegal move…..and the ECJ is so politicised that it is essentially there to rubberstamp what the EU wants.