“This is a dark moment in American history.”

The torrent of abuse, contemptuous mockery and sanctimonious lies continues to flood out of the BBC’s finest…including one senior ‘journalist’ who retweeted a joke about assassinating Trump.

Even Trump’s abstinence from alcohol becomes a vehicle for the BBC to attack him…the chosen headline photo being of another President…Nixon….despite Nixon not being teetotal… 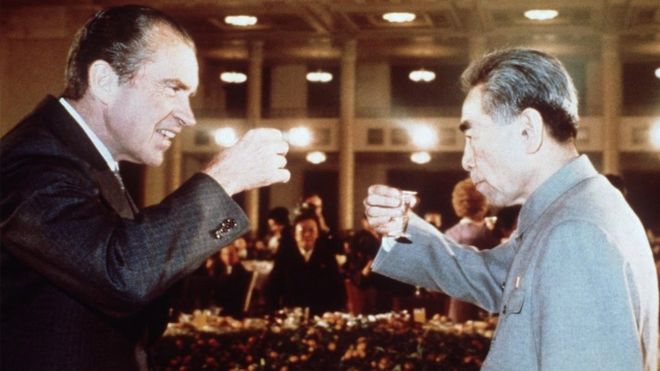 We hear that….’ Mr Trump has eschewed alcohol his whole life, making him a first among modern US presidents. ..His approach to alcohol is also a window into a personality that appears to crave control over others. Mr Trump ordered his children to follow his example. Every day he would drum the message into them: No drugs, no alcohol, no cigarettes. “I’ve been very tough on my children with respect to drink,” he said.’

Seriously?  Cheap shot, no pun intended….and bizarre…what father wants his kids to be drug addicts, alcoholics or die of lung cancer…what a bastard that he wants to stop that.

But why did the BBC include Nixon?  Nixon is the ‘evil’ President….but look at what the BBC want to put in your mind as they try to manufacture an association between Trump and Nixon…

‘The most disturbing picture of presidential drinking is provided by Richard Nixon, a man prone to morose self-pity who medicated his moods with booze.  According to his Secretary of State, Henry Kissinger, Nixon’s trouble was that a small amount of drink would set him off and late-night threats of military action were made when the president was the worse for wear.  When North Korea shot down a US spy plane in April 1969, an enraged Nixon allegedly ordered a tactical nuclear strike and told the joint chiefs to recommend targets.’

Richard Nixon was a warning to future presidents on the danger of mixing hubris with drink. He is a reminder too of the awesome executive power a US president has when it comes to conducting foreign affairs.

With no previous political or military experience, Donald Trump is unlike any incoming president. His hubris is clear to all and his (sober) stream of excitable tweets prove an impetuous temperament.

That is a shockingly pompous and sanctimonious piece of drivel that sets out to describe Trump by its obvious attempt at a comparison with a drunken Nixon as some sort of out of control lunatic who will cause a nuclear war in an article supposedly about Trump’s teetotalness….so why compare him to a man whose worst acts may have been conducted under the influence of drink?…it looks like the BBC just invented a narrative in order to do another hatchet job on Trump…once again another bizarre BBC ‘report’ on Trump that goes beyond reason and informed comment and drops decidedly into the realms of the gutter press.

Still just one of many, many BBC pieces that have been spewing out of the fake news factory that is the BBC.  There’s lots, lots more…get yourself a brew and pull up a sandbag.

Yesterday I heard Emma Barnett having a nice chat with Vince Cable and the subject of Gove’s initerview with Trump came up…Barnett wanted to know if it was wrong of Gove to have done that interview.  Sounded an awful lot like sour grapes from a BBC that would have loved to have that interview…jealousy and of course an opportunity to slip the knife into Brexiteer Gove.

Oddly enough I wasn’t the only one who noticed the BBC’s angst about the Gove interview.  Heatstreet has a look at the BBC’s Pravda-like attacks on Trump...The BBC’s Coverage Of Donald Trump’s Rise To Power Has Been Disgraceful

They note, amongst many other deplorable BBC sins…

Such is the skewed mentality that the Conservative MP Michael Gove was attacked for his questions when interviewing Trump for The Times of London. Gove’s questions were pretty straightforward, broadly neutral and covered the main issues that would be of concern to a British readership. But Jo Coburn of the BBC Daily Politics programme felt that Gove should have taken the chance to go on the attack. He was effectively taken to task for not having done so.

Trump has assembled a serious team with a serious programme of policies to implement. The BBC should stop emoting and instead offer some sober, rigorous and balanced considerations about the prospects for the free world with its new leader.

The BBC never bothered reporting the many serious interviews about policy that Trump had during the election preferring instead to just go into histrionics about Trump being a racist because of his comments about Mexicans and Muslim immigrants.  This approach to reporting Trump still predominates at the BBC as evidenced above and in comments I have heard today and everyday with the inevitable charge of racism being levied at him.

We have a series of programmes called Trump: The Presidential Precedents which looks at how former Presidents got elected and how they acted in office…I haven’t listened to it but judging by other programmes I can only think the BBC will pick out the bad characters, the disasters and the way ‘vulnerable voters’ were conned and tricked into voting for such Presidents on false promises…and then link all the bad to Trump and use it as a Mystic Meg prediction of what Trump’s Presidency will look like and what its legacy will be….all filtered through the BBC’s own hatred of Trump of course.

There is also a series that brings us the insights and thoughts of US writers on Trump and the future…America Rewritten...so no guesses there as to what we get…a torrid serving of anti-Trump gruel from some angry, bitter and disappointed Lefties….you may or may not be amazed at the vitriol and anger they express towards trump.

The presenter, Robert McCrum, gives us a clue as to what you will hear…

A focus for the opposition to Trump and the challenge of the new administration might be the integrity, candour and good humour of the American mind at its best …and....[there is] great cultural and ideological resilience to defend America’s values with the mobilisation of writers and intellectuals [against Trump]

We heard that Obama was so perfect, so in tune with lefty writer’s values that they didn’t have anything to write about…that has now changed as the world is in peril…how familiar….when Labour was in power the court lap-dogs didn’t bark either.

Oh and just a sample of the new ‘truth’ that we get from the BBC as we were told the conservatives in America have been sidelining Blacks whilst welcoming other races and that there are no more black mayors…hmmm…really? [Never mind the Black President]…

No mayors, 500 mayors.  The truth is out there somewhere…which is why the BBC  hates the internet.

Fairly obvious the BBC has ferried in a load of left-wing anti-Trump writers to attack him and present him as not only a danger to ‘American values’ but to the world.

Personally I’d have thought Trump exemplified American values, brash, loud, non-PC, independent and not ashamed to be successful…a man who wants to make America great again….American values and character that we know the BBC has always looked down upon.

5Live has also been dragging in the anti-Trump brigade, in this case one they wouldn’t normally touch with a barge pole…the right-wing shock jock Glenn Beck…he doesn’t like Obama but he also hates Trump and paints him as a reckless danger to the world and a racist to  boot.  All based on what exactly?  Nothing.  But hang on there’s more.  5Live wanted to know what Beck thought of Brexit….call the cops, MI5 and the SAS….Brexit is an East-Eurasian conspiracy…the Russians have been flooding the UK with money and buying our votes, stealing our democracy…..Leave was nothing less than the useful idiot of Putin who has been controlling our minds and actions for decades now…we all love the EU really.

Not sure that was a winner interview for the BBC.