The Young are up in arms, disenfranchised (couldn’t be arsed to get out of bed), marginalised, ignored, demeaned and …and…ooohh…it’s soooooo unfair!!!! 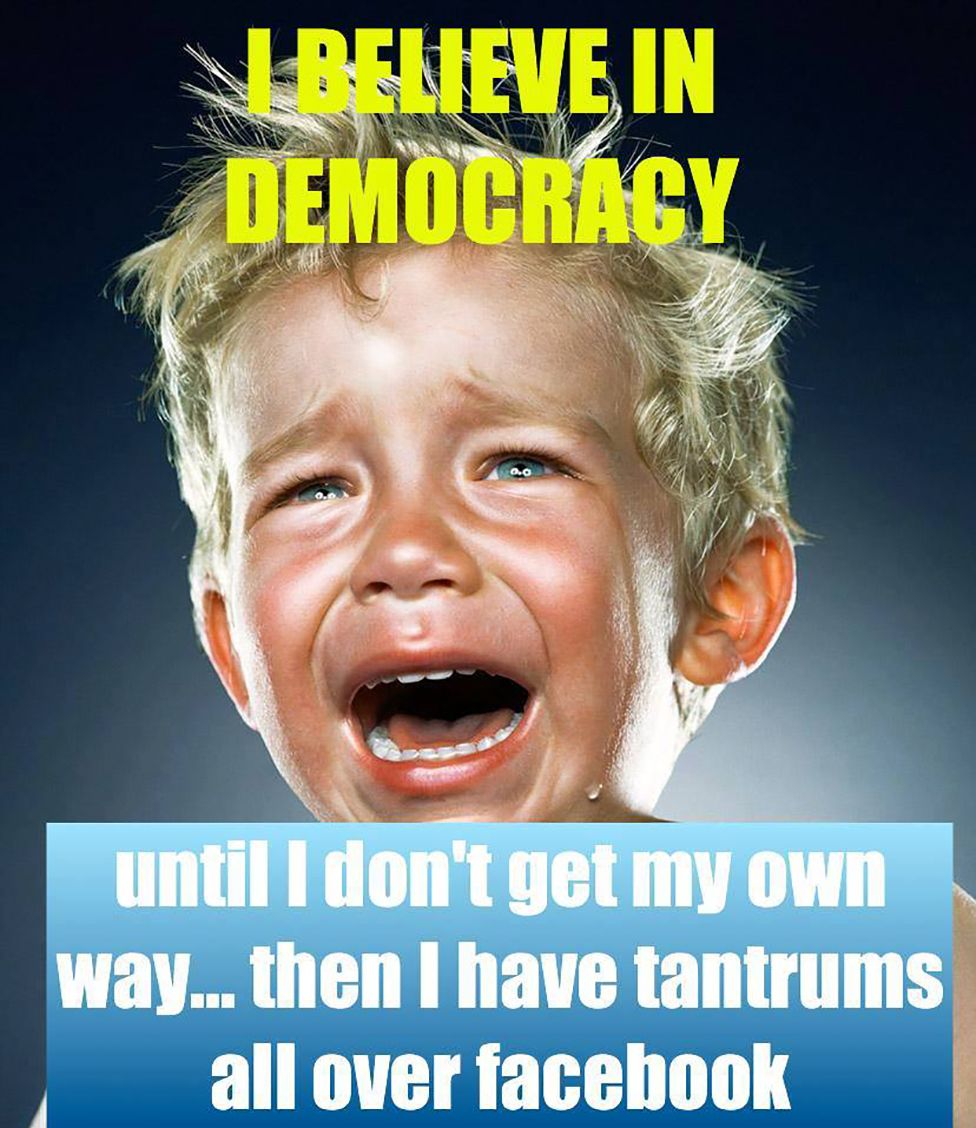 Rather than take to the streets with a Koran in one hand and an AK in the other they’ve taken en masse to modern liberal guerrilla fighter’s weapons of choice, Twitter, Facebook and the dread power of the online petition….but what might be familiar to any Jihadi is the BBC’s support and understanding for their grievances and its determination to press their case for them without much in the way of critical thought or analysis. The Young, we are told, don’t like Brexit and that’s good enough for the BBC…the case rests.

Good job Twitter, Facebook and Change.org weren’t around in 1975 or else all those youngsters who were denied the vote then would have been savaging the Oldies as now…. but now the old dogs have had their day.  And what about all those bastards who joined the army to fight the Nazis in WWII?  What a load of selfish f*****s eh? The underage who couldn’t join  up might have wanted to surrender if only they’d been given the chance.  We could have had a beautiful EU long ago of it hadn’t been for the British Armys’ killers and murderers who destroyed the dream…..yeah Hitler may have killed 6 million Jews but the motorways, the socialism, the pride and unity across Europe, the smart uniforms, just think…and anyway Hitler only killed the Jews coz of what the Israelis were doing in Gaza…so you know…like…they deserved it…only saying what I heard on the BBC.

Brendan O’Neil talks about the massive drive to overturn the democratic vote (the most democratic vote…far more than any general election), part of which is the loud campiagn by the ‘yoof’ to try and claim they were somehow robbed of their future and therefore, in some shape or form, the vote should be run again…only with the young getting two votes each presumably.

The BBC has been very supportive and has been running through all the possible permutations and excuses for a rerun….if only Angie had got out of bed, if only George had not been out of his skull at Glastonbury, if only Alfie’s mum had let him out to play….the vote could have been so different.

This is all part of the BBC’s own campaign to delegitimise the vote.  The BBC has many angles of attack not least of which of course is the usual omission or downplaying of inconvenient and awkward facts, such as the Obama backtracking on the perils of Brexit and his new found criticism and scepticism about the EU project, as well as a remarkable reluctance to ask questions about the Remain campaign’s astoundingly dishonest and alarmist claims and threats whilst forensically and relentlessly attacking Leave’s claims.  The BBC, along with others, want to make out that the stupid voters were fooled by ‘lies’ and so the vote can be annulled.

Alastair Campbell tweeted: ‘EU law allows customers to withdraw from contract if contract based on lies. LEAVE agenda riddled with them. Lawyers on the case.’

The BBC disgracefully, but as per normal for them, portrays the voters as thick, ignorant and uneducated and not a little bigoted.

Was there a Brexit graduate gap?

Voters without degrees were more likely to back leaving the European Union, figures suggest.

Along with age, class and the part of the UK you live in, graduate status was one of the key factors that influenced whether or not you supported EU membership, election analysts believe.

Andrej handed out leaflets for the Remain campaign. At first, every British-born voter he spoke to told him they were voting Remain. But then all of a sudden, “on Facebook they were saying ‘We’re using pens to vote‘”.

It’s not malice that drives suspicion of foreigners and conspiracy theories, he believes. “Some of the people here are not educated good. They don’t have access to the information in full.”

The BBC may slip in the odd qualifier that things are ‘complicated’ but the message is plain….the less educated you are the more you are likely to vote Leave..and the more likely you are to be fooled by the propaganda…..as the Guardian insists…

A week before the referendum, pollsters working for Britain Stronger in Europe admitted that they were getting extremely worried about Vote Leave’s suggestion that £350m sent to the EU could be diverted to British priorities such as the NHS. Guardian focus groups in Brighton and Knowsley suggested many voters saw the message and believed it.

One woman in Merseyside told the group: “Just think, we could get £20bn back a year and make the country great again.”

The BBC has been making strenuous efforts to attack the £350 million pound claim by Leave and suggest that, as the Guardian does, this led to voters being misled and as they have based their vote upon it…let’s all vote again.  As said though…no such analysis and conclusions about the Remain campaign’s claims.

I noted that Nick Robinson and Sarah Montague both (an editorial decision?  Must be) used the same way of talking about the £350m in interviews on Saturday with Leave representatives along the lines that ‘If you can’t get all that £350m back…’.  It’s a bear trap for Leave that the BBC deliberately set…..because if they say ‘But we won’t get £350m back…’ the BBC leaps in and says ah but your whole campaign was based upon that (when the BBC isn’t alternately, when it suits, claiming the campaign was based on immigration) and you now admit it was a lie.  It has been the BBC that has been claiming Leave said we would get the whole £350m back…..Leave have always qualified their statement by admitting that we get a rebate and that the EU spends some of that money on UK projects…Leave’s point, missed again and again by Humphrys and Co, was that it is the UK government that should choose how to spend that money not an unelected EU bureaucrat.

The BBC has been trying very, very hard to find evidence to ‘prove’ Remain’s biblical claims of doom and disaster are coming true……and yet it is a mere 5 days since the vote and things are bound to be jittery….the more reasoned predictions always said short term the economy would take a moderate tumble but would bounce back possibly stronger.  The BBC opts to report the market and sterling falls as signs of Osborne’s impending doom and ignores that long term things will improve.

No proof of course that is true but now every racist attack will be so labelled….and yet as we know all too well the BBC relentlessly reported such attacks before the vote.  Many such reports may well be false…the arson at a Halal butchers seems somewhat dubious…not the first time such fires have been set for insurance or to blame ‘racists’ …remember the Darul Uloom school ‘arson’?  Four boys arrested…no names and no convictions?  Why not?  Was the fire set by boys from the school themselves in order to blame the EDL in the wake of the killing of Lee Rigby and to make out that Muslims are the real victims of such murders?

In 2014 Poles were being attacked…in ‘Remain’ country too…

The BBC themselves reported that Polish immigrants were the attackers in some hate crimes….

Cameron of course has joined the bandwagon and made his opportunist speech about ‘hate crimes’ linking the latest attacks to Brexit and yet nowhere do we hear him express any concern for the Leave voters attacked and abused in what are equally ‘hate crimes’.  Why are the police not investigating the ‘Liberal’ terror squads on Twitter and in the streets who vilify Leave voters?

The BBC has done a story on this and yet it’s of lower profile than its mainstream stories about immigrants being attacked and somehow it’s just not really a hate crime.

By 4.40 am on Friday 24th, it was clear that the mass of people in the UK had voted to quit the EU, doing so in a bigger number than have ever voted on any issue in any British ballot before. Surprised and amazed I went for a morning walk with a friend visiting from London. He was wearing a red ‘Leave’ T-shirt, not to be provocative but it was the only thing he’d brought with him to wear. I hadn’t noticed it at all, so I was surprised when a fat youth, wearing an earring and tight shorts shouted at us: ‘You should be ashamed! Ashamed! You have ruined the lives of a whole generation!’

On BBC-2’s Newsnight that night we were treated to a small forum in which someone with the unlikely name, ‘Paris Lees’  a ‘transgender rights activist,’ who writes on Twitter that ‘it’s time for a revolution of love,’ declared that the Leave campaign had been a load of deliberate lies. She/he railed about old people ruining the future for her generation. Dr David Starkey asked her/him quite logically if she/he would like a cut off point for voting, people over 65 perhaps not being allowed to vote at all, or younger people having two votes?

She/he then turned her/his loving gaze onto Dr David Starkey, discounting his opinion because, she said, he was a ‘privileged, white male.’

Perhaps we should have a cut off point for the terminally stupid and idiotic…perhaps Newsnight should as well…why waste our time with ‘interesting’ morons?  Then again….Paul Mason.

The BBC has a strange logic…it gathers in every single tale of racist attack, pronounces them as the fallout from the Brexit vote and implies that Brexit is therefore a bad thing.

Compare how it reports on crimes by immigrants.  There are thousands of crimes committed by immigrants in the UK ranging from murder and rape to shoplifting and fraud…and yet the BBC does not make any link to ‘immigration’ and certainly does not draw the conclusion that perhaps immigration has some drawbacks and maybe it should be controlled.

Perhaps Mark Easton or Evan Davis would like to explain how open borders was good for the family of Alice Gross…tied up, raped, abused and killed?

Alice Gross would almost certainly be alive today if it hadn’t been for the EU’s freedom of movement rule as he wouldn’t have tried to come here.

Mark Easton, who sits on the BBC sofa blithely telling us how immigration is good for us and that it is unstoppable so we’d better get used to it, should be ashamed of himself.

Yelling abuse at a Muslim in a headscarf or raping and murdering a 14 year old girl.  Which is worse?  Depends who does the crime says the BBC.

64 Responses to “White Trash shouldn’t be allowed to vote!!”