As Syrian refugees flood into Europe what baggage may some bring with them?

Following is an interview with Syrian actress Amal ‘Arafa, which aired on Al-Hiwar TV on October 4, 2008:

Interviewer: If political circumstances change, what will happen?

Amal ‘Arafa: Policies may change, but there is something that is already in my genes. We’ve been brought up to hate Israel. It’s in our genes. If Arab countries make political decisions, and there is peace, and so on and so forth… First of all, who would be against peace? I am not against peace.

Interviewer: Of course not.

Amal ‘Arafa: But as far as I am concerned, Israel will continue to be a black, dark, and murky spot in my memory, in my genes, and in my blood. Even though I am Syrian and not Palestinian, the Syrian upbringing we received and by which we lived – we’ve sucked it with the milk of our mothers. There is no playing around with this, it’s in our genes, and we will pass this down for many more generations.

The Highland Rebel in the comments brings us this apology from the BBC: 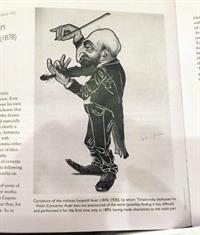 Classical music lovers were left stunned when they spotted an “antisemitic” illustration in a BBC Proms programme.

Gillian Stern, from Finchley, said she was shocked that a “hideously and very obviously antisemitic cartoon” of the violinist Leopold Auer appeared in the programme for a Proms performance of Tchaikovsky’s Violin Concerto.

Auer was a violinist and teacher of significance, and a number of composers, including Tchaikovsky, dedicated pieces to him.

Ms Stern said: “This image of Leopold had been printed large in the programme, with no full context or explanation of its questionable nature.

“Leopold was one of the most important violin teachers of his time. If you look him up you will see this fine man, and there are plenty of pictures of him available – but they have used what was at the time clearly a caricature.  “It is the most extraordinary thing. I can’t get my head around why they would have picked that.”
She added: “I was so shocked I tweeted it to them to complain, but no one got back to me.”

Surprised by the image was violin teacher Nigel Goldberg, who said: “It is an antisemitic cartoon and it is completely out of context. There is no explanation of the image at all. Anyone I’ve shown it to, Jewish or not, has been stunned.”

A spokesperson for the BBC Proms was unavailable for comment.