Note although the man’s name is actually spelt ‘Jihad’ Donnison has changed the spelling to Jehad….for obviously ‘political’ reasons……. 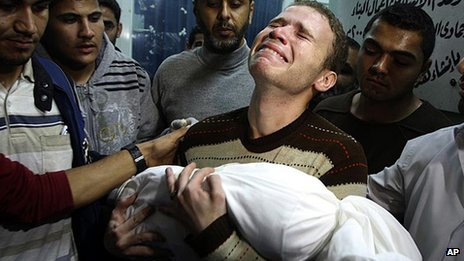 Gaza baby ‘only knew how to smile’

Standing in what is left of his burnt-out home this week, Jehad showed me a photo on his mobile phone.

It was of a cheeky, chunky, round-faced little boy in denim dungarees, chuckling in a pushchair, dark-eyed with a fringe of fine brown hair pushed across his brow.

“He only knew how to smile,” Jehad told me, as we both struggled to hold back the tears.

Most likely is that Omar died in the one of the more than 20 bombings across Gaza that the Israeli military says made up its initial wave of attacks.

Omar was not a terrorist.

Unfortunately that was a lie:

UN verifies that BBC reporter’s son was killed by Hamas

Back in the present Donnison continues the good work on Twitter:

And isn’t a lot better on the job proper…here subtly cheerleading for Hamas..the same report on the website and the Today programme this morning:

Donnison gives the impression that the Palestinian Authority (Western backed as Donnison slips in), and Fatah by extension, are not popular in the Palestinian territories…..he tells us that the PA might be considered collaborators with Israel…as they work together to provide security in the West Bank….no misgivings reported about Hamas though.

Donnison then tells us that the PA has failed to capture the public mood, they do not listen to the people… they don’t launch rockets into Israel presumably….that ‘people’ who ‘all’ support Hamas we are given to believe.

The whole piece is a subtle pro-Hamas piece, anti the ‘Western backed’ PA, the people ‘united in their anger’…ie against Israel which must be doing evil things...and if the PA doesn’t reflect that anger in its actions, as Hamas does, it cannot be representative of the people and their demands….and if the people support Hamas and its policies, those demands must be to rocket Israel.

We could easily conclude that Donnison is giving implied support to Hamas’ policy of rocketing Israel here….what then does he make of Hamas’ intention to wipe out Israel?