Dreams Are Made Of This

BBC getting excited about this:

Berlin House of One: The first church-mosque-synagogue?

Berlin thinks it is making religious history as Muslims, Jews and Christians join hands to build a place where they can all worship. The House of One, as it is being called, will be a synagogue, a church and a mosque under one roof.

Rabbi Tovia Ben Chorin. “From my Jewish point of view the city where Jewish suffering was planned is now the city where a centre is being built by the three monotheistic religions which shaped European culture,” he told the BBC.

Yep….Let’s compare the critical, adverse reaction to Islamic terrorism and cultural supremacy to the Nazis imposing the Holocaust upon the Jews….and as for shaping European culture…if Islam had been the dominant force over the centuries we would have been an economic, scientific, artistic and cultural backwater as just about every Muslim land is now….not my verdict but that of a Muslim (and Mehdi Hasan himself admitted as much in his infamous video…how many Nobel Prizes are in Muslim hands, how many books get translated, how many Universities are in the top 200?):

Compare Churchill’s remarks with those of a modern Gulf businessman from Dubai, whom the travel writer Jonathan Raban quizzed about Arab oil wealth.
The Dubaian rejected any delusion that this constitutes genuine prosperity: ‘Rich is education . . . expertise . . . technology. Rich is knowing. We  have money, yes, but we are not rich. We are like the child who inherits money from the father he never knew.
‘He has not been brought up to spend it.
‘He has it in his hands; he doesn’t know how to use it . . . is a country rich that cannot make a brick, or a motor car, or a book?’

Good of the BBC to serve us up this pap so uncritically, their intentions being blatantly obvious….let’s all play nicely, and look how wonderful Islam has been, and how terribly Muslims are being treated now.

Did enjoy the photo of the Architect though…and I have to say what an inspiring design of building, clearly the result of much thought and years of study…sponsored by Lego no doubt: 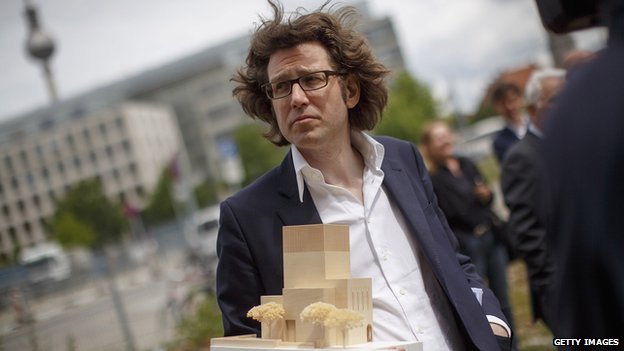 A rabbi, a vicar and an imam walked into a pub…….

I’ll let you provide your own punch line…though not to the throat.

38 Responses to Dreams Are Made Of This