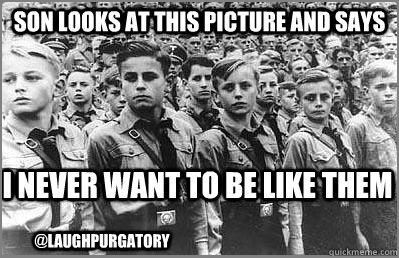 According to research Britain’s under 30’s are more inclined to lean to the right politically…the BBC in its radio trailer for a programme on this thought this might be a bit of a problem and have set out to investigate.

It’s a commonplace thought that the young start their lives as idealistic left-wingers, only to become more conservative with age. But are today’s twenty-somethings going to debunk that as a myth? Extensive polling shows that in many respects, young people now are to the political right of their parents and grandparents when they were young. Their attitudes often appear characterised by a buccaneering individualism, a suspicion of collectivism and a greater scepticism towards the state.

Declan Harvey of Newsbeat and a team of young journalists examine the implications and ask what it might mean for the welfare state, social institutions and the political landscape in the future.

The programme is just an excuse to target all the favourite bête noires of the left…individualism, the consumer society, the right wing media…oh and thinks that the decline in ‘collectivist norms’ may also be to blame…since when has communism been the ‘norm’ here?….’here’ being outside the BBC bubble.

‘It looks at the possible suggested causes, from the impact of policies which have reduced the level of support young people receive from the state, media coverage of the benefits system, the general decline in collectivist norms since the late 1970s, the rise of the consumer culture, to the role of social media which put the life and social interactions of the individual at the centre of everything.’

The BBC is worried about the rise of what is obviously the next Hitler Youth who will abandon the vulnerable and workless to heartless payday loan companies, who will throw them out of social housing to live on the  mean streets of London now lined with spikes to fend of the verminous homeless and it’ll be a toss up whether granny dies from lack of food or by freezing to death under this callous, uncaring, uncharitable regime.

Yes the BBC is concerned that the youth will vote for the ‘nasty’ Tories….who can doubt we will now see a raft of programming targeted at such ‘youth’ with the aim of re-educating them, with rebalancing their obviously juvenile and immature prejudices and encouraging them to look on life in a more humane, understanding and compassionate, left wing way.

In all seriousness the BBC has completely lost the plot.  This is a highly political programme that insults, denigrates and maligns those with right wing views, treating them as if they are a problem.

What editor thought this might be a good idea in the run up to an election to be pumping out what amounts to left wing propaganda berating these young people for not taking the same line as the sanctimonious and self-righteous worthies of the BBC?