Murder of the Truth Under the BBC Trust 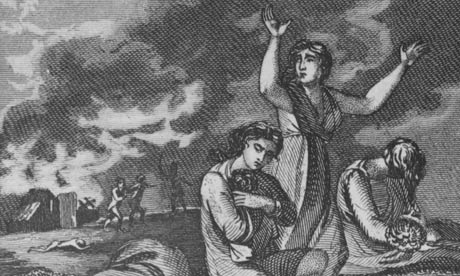 They came from fort William, with murder in mind,
the Campbell had orders, King William had signed,
put all to the sword, these words underlined,
leave no one alive called MacDonald.

In 1692 the Campbells, in cahoots with the English, set upon the MacDonald clan in an attempt to massacre them in an infamous moment in Scottish history….a ‘murder under trust’.

Thirty eight men were slaughtered and forty women and children died of exposure when their homes were burnt to the ground.

Nicky Campbell likes to remind us of past infamy and point the finger of blame however unjustly.

On Friday Campbell was discussing the arms trade (25 mins ) and had on Labour MP Fabian Hamilton who wanted to stop all arms exports.

It’s a small but significant comment, a telling comment, that illustrates the mindset of many of those inside the BBC bubble.

Hard to know how such a highly educated, intelligent and scrupulously fair minded journalist, backed by the extensive resources of the BBC, and Google, could make such a schoolboy error….in 1990 there were still 50,000 miners toiling down pit.

We all know that Labour has closed more mines that Thatcher ever did and put more miners on the dole than she did:

“…there is the charge that it was Margaret Thatcher who ‘destroyed’ the coal mines and the mining communities. How many times have the BBC broadcast that claim without refutation? Yet the facts show that far more coal mines closed under the Labour prime ministers Harold Wilson and James Callaghan.”

(However many times you can add one more thanks to Campbell.)

Perhaps Campbell utilised the data mining services of ‘Left Foot Forward’ who tell us that:

The historical data shows that while 212,000 coal mining jobs were lost under the 1964-1970 Labour Government, under Mrs. Thatcher’s 1979-1990 government, the percentage decline in jobs was actually double that.

43 per cent of mining jobs went in the 1960s under Wilson while 80 per cent were lost under Thatcher.

Unfortunately when there is a change from hard figures to percentages you know you are being sold a pup.

Under Thatcher 193,000 miners found themselves without work…..that’s less than 212,000 by anyone’s reckoning…and all for ‘the good and safety of the country’.

The MacDonald’s were ‘murdered under trust’  by the Campbell’s,  and Campbell has murdered the truth under the aegis of the BBC Trust…as do his fellow BBC journalists who like to propagate this anti-Thatcher propaganda whenever they get the chance.

Ironic that in the aftermath of the Glencoe Massacre it was ‘campaigning journalism’ that resulted in an official inquiry about events which were sensationally publicised and became part of the politics of the time.

However it’s not all bad for the Campbells…..‘just think for a moment of the great gifts our clan has bestowed upon the universe – Glen Campbell’s Rhinestone Cowboy; Naomi Campbell’s beauty and diamonds; Ming Campbell’s sprints and liberalism; Sir Malcolm Campbell’s land-speed records; Campbell’s soup; and Alastair Campbell’s spin-doctoring.

The name Campbell is derived from combining two Gaelic words – Cam, meaning crooked and Beul meaning mouth. Which possibly explains why Alastair became such a fine modern exponent of the dark arts of – but sadly not even he could put a positive spin on the name.

History has judged us and I don’t suppose that all the soup in the whole world will redeem it.’

You are hereby ordered to fall upon the rebels, the McDonalds of Glenco, and put all to the sword under seventy. You are to have a special care that the old Fox and his sons doe upon no account escape your hands, you are to secure all the avenues that no man escape. This you are to putt in execution at fyve of the clock precisely; and by that time, or very shortly after it, I’ll strive to be att you with a stronger party: if I doe not come to you att fyve, you are not to tarry for me, but to fall on. This is by the Kings speciall command, for the good & safety of the Country, that these miscreants be cutt off root and branch. See that this be putt in execution without feud or favour, else you may expect to be dealt with as one not true to King nor Government, nor a man fitt to carry Commissione in the Kings service. Expecting you will not faill in the fulfilling hereof, as you love your selfe, I subscribe these with my hand  att Balicholis  Feb: 12, 1692

For their Majesties service

17 Responses to Murder of the Truth Under the BBC Trust