NOT ON THE BBC

After the fanfare given to the start of the George Zimmerman trial the BBC has gone a bit quiet on the topic. And I don’t just mean a lack of updated reports, I mean no tweets from its journalists or anything. The testimony of the prosecution’s surprise “star witness” Rachel Jeantel has been very poor to say the least. She told the court Trayvon Martin had referred to Zimmerman as a “creepy-ass cracker” and “nigger”, she used the word “retarded” (another big no-no in PC America), admitted she didn’t know who threw the first punch, and was unable to read a letter she had supposedly written to Martin’s mother. One black blogger said Jeantel’s performance was “cringe-inducing, embarrassing, and mortifying to watch.” The testimony, especially the “cracker” comment, has been so damaging, it seems, that the Martin family attorney suddenly declared last night that the trial was not about race after all, even though that is the line the prosecution has been pushing.

No doubt the BBC will pick up the tale again when things start going better for the prosecution.

In a similar vein, here are a couple of other stories about violent attacks with a strong racial element that have been in the news in the US this past week. Neither has been covered by the BBC.

Two ex-Camp Pendleton Marines should be executed for the brutal torture-slaying of Brooklyn-raised Marine Sgt. Jan Pietrzak and his young bride, a California jury has decided.

A third ex-Marine, Kevin Cox, 25, should get life in prison without parole for his role in the shocking crime… A fourth man charged with the murders, Kesaun Sykes, is being tried separately…

“I did it because you need to know,” he said, describing the double slaying as a “sadistic” game played by four cold-blooded killers.

It has all the elements of a perfect BBC US story, but it wasn’t covered. Why? Perhaps the pictures of the victims and the convicted thugs hold the answer: 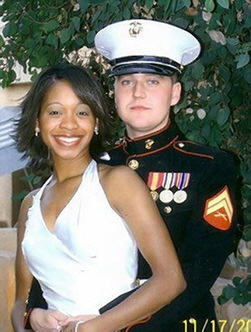 And here’s video of a young mother being savagely attacked in her home by an intruder as her young child watched on. Again, I can’t help thinking that if the colours of the attacker and victims were reversed we’d have seen an edited version of this video on the BBC website by now (I say edited because the attack is so brutal – not an easy watch):

Some stories fit the preferred narrative. Others do not.

44 Responses to NOT ON THE BBC