David Dimbleby admits to being a member of the IRA and that he was very proud to have worn the ‘uniform’…though he insists he didn’t bomb or kneecap anyone….insisting he had nothing to be ashamed of……he never did the disgusting, disgraceful things that Gerry Adams did.

Well no, that’s obviously all untrue…and the BBC would never call Adams disgraceful and disgusting…despite him having been a member of one of the most notorious terrorist groups in the world…and now a respected politician. 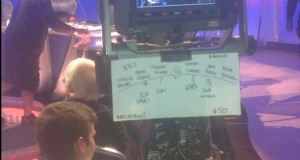 The BBC naturally apologised to a, er, Sinn Fein member for labelling him SF/IRA on a name card at Question time….Sinn Fein….murder, bombings and terror have nothing to do with Sinn Fein ideology.

However Boris Johnson and the Tory ‘Toffs’…that’s a different matter…..they are ‘disgusting and disgraceful’…

David Dimbleby claims that when he was a member of the notorious Bullingdon Club  he ‘“loved” being elected to the club and was “really proud” of his uniform…insisting his cohort “never broke windows or got wildly drink”, he dismissed opinions claiming that he ought to be ashamed of his membership.‘

He goes on to say: ‘ It was a completely different organisation from what it clearly became when Boris Johnson, David Cameron and George Osborne joined, who seem to be ashamed of it, pulling their photographs and so on. But we never did these disgusting, disgraceful things that Boris did.”

Either David is lying through is teeth or he was completely boring and I hope he got debagged regularly for being so pompous and straight laced.

Wiki tells us, as if you couldn’t have guessed, that the Bullingdon has been notorious for  a very long time…long before Dimbleby joined up….

Infamously, on 12 May 1894 and again on 20 February 1927, after dinner, Bullingdon members smashed almost all the glass of the lights and 468 windows in Peckwater Quad of Christ Church, along with the blinds and doors of the building. As a result, the Club was banned from meeting within 15 miles of Oxford.

It might be noted that all damage is paid on the spot…possibly not always a consolation to the owner of any establishment…but how many ‘working class’ pubs that get trashed are similarly recompensed?

Part of the joys of being a student I would imagine…being old enough to go to pubs, have money to spend and the time to sober up with few responsibilities….not as if it’s just the Bullingdon Club students that get hammered….the newspapers are often filled with photos of students  in various stages of paralysis and tales of excess…they just aren’t dressed in a fancy suit….fancy dress maybe.

Gotta wonder if that colours Dimbleby’s view of the Tory ‘Toffs’ despite himself being TV ‘royalty’.

Would the BBC treat anyone else with such contempt….Labour politicians who dressed up as Nazis for instance…I’m certain none of them got up to any hi jinks at Oxford or Cambridge…which of course they all went to as well as the Tories.

I am certain,  just like David Dimbleby, they were all angels.

Just keep bashing the Tories for being rich….despite people in the media probably earning far more than any of them.