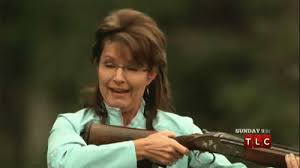 The BBC are continuing down the road of pointing the finger of blame at white, far right groups or individuals  and other domestic possible candidates for the Boston bombing…..you have to ask on what evidence?….other than the coincidence of the date of the attack there is nothing else to go on.

“Hysteria is the triumph of terror, but America has responded remarkably unhysterically to the bombs in Boston. This demonstrates a new maturity.’

Shame the BBC haven’t displayed the same maturity as they rush to judgement for their own reasons.

The New York Post says this photo has apparently been released by US authorities in the course of the investigation:

Now there is absolutely no evidence that these two were involved in any way…but it shows that the following claim by Frank Gardner is, er, somewhat premature and that the investigation is still open to many possible scenarios.

The Telegraph has noted that a ‘witch hunt’ is in progress for the culprits…it can’t help when the BBC join in…..

FrankGardner has made up his mind though….it’s a Redneck Rampage:

‘So what lines is the Boston investigation following and why?

A home-grown US operator with a domestic agenda

As of Wednesday, this is thought to be the most likely culprit.

The FBI maintains a long list of potential threats emanating from US individuals or groups harbouring violent intentions towards the federal government, civil organisations, or society in general.

Perhaps Frank Gardner should read the FBI’s own statement:

Contrary to widespread reporting, no arrest has been made in connection with the Boston Marathon attack. Over the past day and a half, there have been a number of press reports based on information from unofficial sources that has been inaccurate. Since these stories often have unintended consequences, we ask the media, particularly at this early stage of the investigation, to exercise caution and attempt to verify information through appropriate official channels before reporting.

Where’s the evidence for his claim?

He has no evidence to back it up but here the same lack of evidence is used to deny the involvement of Jihadists:

‘America has long been their favoured target, but there are reasons to question whether this was the work of jihadists.

There is no suicide element, the explosive used was relatively low power and, most importantly, there has been no claim of responsibility.’

As far as I am aware no such statement has been made by US officials as to the effect that this is a domestically inspired attack.  As the New York Times says today they are pursuing a broad range of avenues…..

‘While investigators have focused on the images of the possible suspect, they are continuing to pursue a broad range of other avenues, one law enforcement official said.

“We try not to get tunnel vision about it,” the official said, adding, “we’re working a lot of other possibilities.”’

‘Tunnel Vision’…the trouble with the BBC is that they only see one thing at the end of that tunnel…an angry white man.

Such quick and easy judgements based on pure conjecture with a good dose of wishful thinking thrown in for good measure sparks off the usual witch hunts against the Right which if it happened to Muslims the BBC would be outraged about.

The BBC feeds that frenzied witch hunt  by making claims that have absolutely no truth to them at the time made.   The bombers could well be over taxed, angry white men, or it could have been Jihadists or anyone with a grudge about something.

A perfect example of how this type of reporting gives the excuse to anyone with a bee in their bonnet to whip a frenzied attack on the Right  is an article from ‘Salon’:

Let’s hope the Boston Marathon bomber is a white American

This is an incredibly partisan, highly ideological, not to mention intensely racist tract.

It suggests that white, right wing groups do not get the same attention as for example Muslim groups do.

Really? Tell that to the FBI:

‘The FBI will continue to enhance its crucial partnerships with federal, state, local, tribal, and foreign law enforcement agencies; other members of the U.S. intelligence community; and the private sector to combat the unrelenting threat of domestic terrorism.’

If you have ever looked at the list of what constitutes a likely terrorist in the US it covers just about anyone who has said anything about government being too big, or taxes too high or mentions the Constitution….white, Christian, anti-abortion, animal rights activists are all targeted….fly the US flag upside down and you get arrested as a terrorist….or having a missing finger, shaving your beard off, paying with cash, bulk buying food:

Read Der Spiegel and you will know that the Neo-Nazis are under constant observation and security attention in Germany.  In the UK  the EDL et al in this country are the subject of similar attention from the security services.

The Far Right in no way has a ‘free pass’ to do as it likes nor a ‘get out of jail free card’.