Spinning the US jobless figures

When the US jobless figures came out last month showing a drop in unemployment, this was the BBC’s headline: 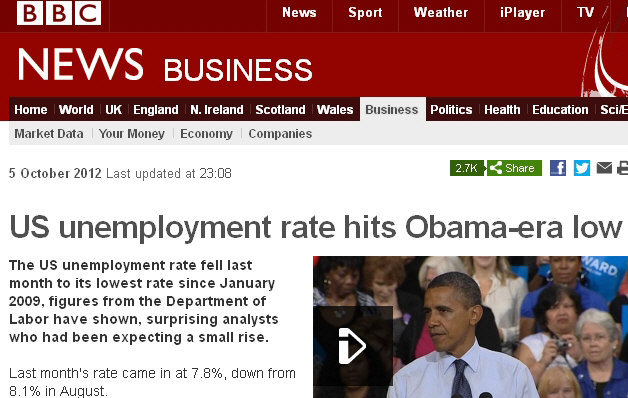 Today’s figures show the unemployment rate has gone back up to 7.9%, so this time the BBC headline concentrates on jobs created instead:

Note the phrase I’ve highlighted above. A few minutes after taking that screengrab I noticed the page had been updated (although the timestamp remained the same):

Someone had decided that even mentioning the rise in the jobless rate on the main page was too negative. To discover that the unemployment rate has gone up one now has to click through to the story. The BBC will do anything it can to make things seem better for Obama.

UPDATE. The Commentator spotted the spin too.

UPDATE 2. I’ve noticed another change. The original opening line for the article was as follows:

The US economy added 171,000 new jobs in October, which was more than had been expected.

By the second draft a word had been added:

The US economy added 171,000 new jobs in October, which was much more than had been expected.

Not very subtle. By election day there’s every chance the BBC will be spinning this as the most awesome set of job figures in, like, ever.

33 Responses to Spinning the US jobless figures