No Such Thing As The Big Society 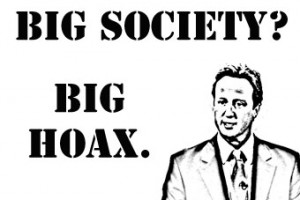 This may shock you…not only has the BBC had something positive to say about a Coalition policy but it was the BBC nemesis of the Tory Party, Mark Easton, a man whose sole aim in life is to ensure no Tory policy goes undamned, who had some praise…notwithstanding he did find this ‘perverse’.

‘The Big Society’ gambit set out to much fanfare and trumpeting as the great white hope by Cameron seems to have kick started a youthful revolution where people are taking control of their own lives…or at least their youth clubs, setting out to organise, run and fund raise for them themselves.

It is quite startling to hear the dependably downbeat Easton…at least about any Tory policy, singing the praises of what seems a stirring of public spirit….people volunteering and creating active citizens.

Oddly the fly in the ointment was a man called Dominic Cotton who is the communications director for a youth charity, ‘UK Youth’….he is in fact a journalist employed to ‘spin’ I suppose you could say, for UK Youth.

Here though he seems perhaps to have got it wrong…as Youth UK seems to be exactly what Easton is praising…involving 40,000 volunteers and copious amounts of fundraising and subsequent good works.

I suspect toes are being trod on and the charity feels its own territory is threatened with rivals competing for money and volunteers rather than any strong argument against the philosophy or likely survival of these new groups.

The BBC didn’t question Cotton’s stand but perhaps it should have.

However that is really a side issue….where is the BBC bias in this story? Well none really other than it stands in stark contrast to its normal output which is unremittingly negative about just about every aspect of ‘Tory’ policy.

This morning the government’s new scheme, ‘Funding for Lending’ was raised on the BBC and immediately the new scheme was dragged down with doubts about how successful it would be with banks still being targeted as the villains of the piece…as being unwilling to lend.

I would like, just for once, the BBC to examine a business that claims to have been refused a loan and look at the business case being made to justify a bank’s trust to lend money….not something I have ever heard the BBC do, it continually highlights rejections but gives no context…after all the business might be a complete no hoper….any one seen a programme called ‘Dragon’s Den’? BBC should remember not every ‘bright idea’ is a business in the making….and remind themselves that firstly the banks are being told to build up their capital reserves and secondly that it was risky lending, and borrowing, that landed us in the mess we are in today.

If the BBC were to be more positive, not where undue, but where it is called for and merits, it would surely help to lift the country. Confidence is everything…it is the instigator of the ups and downs of the Stock Market, oil prices and consumer spending as well as business investment…if the future is grim no one wants to spend money that they might need to survive the doom predicted by a gloomy BBC.

The BBC’s relentless negativity, mocking and sneering about the ‘Big Society’ has I’m sure done more to make people think ‘I don’t want a part of that if it’s such a joke’ and stand back from the fray in many respects.

Having said that maybe the BBC has had a change of heart…recently there was someone on who said he organised a lot of volunteers to clean up a beach…and it was a huge success with more benefits than just a clean beach…unfortunately I can’t remember who and on what programme….essentially the ‘BS’ in action again.

I would have thought this was something that the BBC would in the normal course of events be all over….however of course it is ‘contaminated’ by the Tory brand for too many in the BBC.

It surely is something that would allow otherwise complete strangers who live near each other to come together, get to know each other and do something for their own community…and thereby, taking control away from a government body, into their own hands…something for them to build and own for themselves…and therefore be more likely to look after…and foster the old fashioned ‘community spirit’.

The BBC is involved in many projects from the Open University to schools and charities, not to mention paintballing for terrorists….and it wouldn’t run amiss to divert some of that energy, effort and resources towards the simple task of ‘introducing’ a community to itself and open their eyes to the possibilities that they can run some aspects of that community themselves and actually make it a real community rather than a group of individuals who don’t even know their neighbour’s name.

The BBC is in effect the ‘Big Society’, with community money being pooled rather than hours of voluntary work, in the interests of the country…to provide entertainment , information and education.

However it has been hijacked by a group with an ideology and mindset at odds with the very people who are the BBC ‘customers’ and all too often fails to bring them the service they deserve and expect…and pay for.

25 Responses to No Such Thing As The Big Society