When the BBC produces such vastly distorted political propaganda as this from the Panorama team you have to start thinking that the time has come for  drastic  surgery  cutting out the gangrenous, festering, toxic, politicised heart of the BBC.  They have clearly decided to engage in an outright war of propaganda against ‘Austerity’, quite prepared to use lies and disinformation to spread ‘alarm and despondency’ amongst the population in the hope of inciting social unrest and a toppling of the Coalition.

Panorama is not alone….Victoria Derbyshire, Paul Mason and many others all raise the stakes by painting a picture of doom and hopelessness the only answer to which is taking to the streets…It is perhaps lucky for the BBC that their whole output is not examined closely by those with the power to take measures against them….the BBC should be the subject of an intense scrutiny that leaves no stones unturned, no places to hide…a rigorous investigation of its output to measure just how politicised it is…and then potentially close it down until it can be ‘decontaminated’ and can be trusted to be, not the voice of the people claiming to speak for them, but the source of accurate, impartial and reliable information wihout which no real democracy can function and which gives the people their own voices to speak for themselves and voice their own opinions. 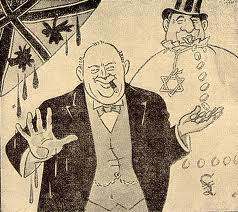 Goebbels would be truly impressed that the BBC Panorama team have so readily and fluently adopted his methods and produced a jaw droppingly distorted piece of black propaganda designed to incite riots, violence and revolution.

It is an astonishingly blatant piece of half truths and lies mixed in with deliberately inflammatory and deceptive, provocative images which attempt build a cleverly constructed tissue of lies to point the finger of blame for the present crisis towards one person.

It is without doubt a shockingly politicised polemic that fabricates a completely false narrative of how we got into this economic mess and who is to blame.

Panorama’s view is that we have a lost generation now…..Youth on the scrapheap with no hope, no jobs and no aspirations.

It tells us that there is no confidence in the politicians…clearly meaning those in power now…to get us out of this economic mess.

The politicians are out of touch…another reference to ‘Old Etonians’.

There is an increasing sense that we’re not ‘all in this together’…another Old Etonian reference.

Panorama says ‘Clearly we’re not all in this together’

Well that’s fairly clear…it’s Cameron and the Bullingdon boys who are the enemy of the People! Hang ’em high!

Panorama tells us that there is growing inequality….its example?…footballers….well yes, they’re getting paid ridiculous sums but there is an even more egregious example of overpay and greed in the Panorama team’s own backyard….just how do they justify the eye wateringly high pay deals for the BBC’s own media stars?…maybe we aren’t all in this together as they say?

The whole premise of Panorama’s polemic is to scare us into believing that if we continue down the road of ‘Austerity’ the country is going to go up in flames as the youth, alienated, jobless and disenfranchised, go on the rampage.

Otherwise we will go back to the 1970’s with mass discontent, destructive industrial action and another lost generation and mass disorder(so what did happen to the ‘lost generation’ of the 70’s then…no answer to that).

Who was to blame…well  ‘Thatcher became leader of the Conservative Party in 1975 when we last had a double dip recession’….but hang on…she wasn’t Prime Minister…in fact it was Labour in power!!…ignore that, ignore the Unions crippling industry, ignore the bad management….carry on regardless…‘Her answer was to unleash the full force of the free market….and it is the bankers who have benefited.’

Oh…so Thatcher is to blame for the housing bubble, massive bank deregulation since 1997, Libor rigging and massive government overspending in the last decade? …no mention, strangely, of 13 years of Brown, Balls and Blair!…but we did keep getting subliminal messages with endless clips of Thatcher….look into my eyes…it’s all Thatcher’s fault your kids are jobless and will die in poverty in the gutter!

Panorama kept insisting that inequality has grown and we’re all worse off because of it. Really? When I look around I see an enormously wealthy country with ‘stuff’ that people wouldn’t have ever dreamed they could own in previous decades.

The truth is that yes the very rich have gotten richer but the vast majority of people have also seen their incomes and living standards increase enormously.

Why have the rich gotten so much richer? Is it really unfair tax laws or the rich manipulating the system to ‘do us all out of our rightful dues’?

The reality is that globalisation has opened up vast new markets and possibilities that weren’t available in the 1970’s to such an extent….In reality it is not (just) bankers who are so destructive of an economy but firstly business men who sack a British workforce and ship the factory out to Poland or China where Labour costs are so much cheaper…the business owners make more money as margins are higher and become even richer but Britain’s economy and its workers lose out….and secondly it is the ever higher wage demands of the British workforce…ie the unions…and costs imposed by government regulation….and living costs in Britain which force up wages.

Panorama bases much of its poisonous attack on the ‘facts’ of youth unemployment and high housing costs which apparently mean youngsters just ‘give up’…they lose both aspiration and then hope as they cannot buy a house…or have to move miles away from where they work.

The example given is a professional couple working in London who have to make a daily round trip commute of 3 hours because there are no affordable houses in London.

However, you might ask just how much of their choice of where to live is actually purely based on cost and how much on life style?…after all, their choice of home was a very nice country house with a garden in a nice location.

Panorama insists there are no affordable homes in London…..really? Well maybe it depends on the ‘lifestyle’ you want…..

Two minutes on Google and you get some very cheap homes…and not necessarily ‘dumps’.

And there were lots more…and they were in London close to the centre.

As for a ‘lost generation’….well where do all the immigrants get their jobs? And where do they live? Millions of them…literally. There are jobs there…if people can travel from China and Africa to get jobs here…and not speak the language half the time…well…you know…on yer bike.

And how about the long list of products that have risen in price….coffee? Er…that has risen enormously because of bad growing conditions. How about vehicle fuel…..well that has fallen at least 10p recently…well what about heating fuel?…risen mainly because of green taxes and subsidies…..what about beef?….feedstuffs have risen because the price of corn etc has risen enormously…due to conditions outside our control…such as Russian stockpiling…and crops going for biofuel instead of food.

So the picture is somewhat more complicated than Panorama presents…in fact completely different.

Panorama adopt a philosophy of gloom and despondency…‘deep cuts(?), high unemployment(?), no growth and no hope…we’re returning to the 70’s.’

The question Panorama asks is can we cope with the new age of austerity? Should we have to choose between buying shoes or food? Its answer is clearly no…and the solution…..

Of course…we’d forgotten those riots weren’t caused by a few anarchist minded yobs out for a good time but by a Youth alienated and forgotten, dumped on the scrapheap by an uncaring Tory government….if democracy fails them then they must use the resources they have to make their voices heard.

Panorama is taking a highly irresponsible attitude…one that is not just ‘forecasting’ social unrest but  inciting it, presenting information in such a way that it deliberately incites discontent, fear and anger….and aims it at particular targets…the Tories and bankers.

This is highly politicised Television designed not to inform but to poison debate and stir up hatred and violence.

There could be good ground for a closer look at this programme from a legal perspective…..let’s see how ‘ghetto’ the highly paid media bumpkins are when they have to share a cell with a rioter.

Don’t forget kids…no job yet, no mansion in Chelsea, no private yacht moored on the Thames?

You know what to do……