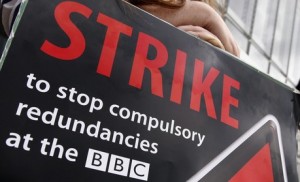 However it wasn’t so much an interview as a chance to bang the drum for Labour Party policies in what was in effect a half hour party political broadcast.

O’Grady was pitching the Labour line that government cuts are slowing the economy, increasing unemployment, reducing tax revenues and therefore forcing the government to borrow more.

No questions from Derbyshire…or none that she considered she really  wanted answering, and no other person on to dispute what O’Grady was saying.

So here’s a quick corrective….So far the government hasn’t cut spending overall which is why it is having to keep borrowing…. unemployment is going down….I think 800,000 jobs have been created in the private sector…far more than lost in the pubic sector….and government fiscal responsibility means that the money we do borrow is at far cheaper rates than we would get under a profligate Labour government who wish to borrow even more…with no idea how to pay it off.

No sign of any thoughts along those lines from Derbyshire….her sole concern was that the TUC had been ineffective in forcing the government to stop the so called cuts in government overall spending.

She seemed quite keen to encourage further strike action…Derbyshire seems quite a fan of such actions…no student protest is complete without her and the 5Live broadcast team.

‘You need to go on strike to get the government to change their mind!’

I took that to be an instruction from Derbyshire…I could be wrong…but I doubt it.

The ‘callers’ to the show must have been handpicked ‘onside’ cheerleaders for the cause…..they didn’t exactly cause O’Grady any problems…

Caller 1. ‘I agree with everything you say’.

Caller 2. ‘I agree with everything you say but when are we going to have a general strike?’

Caller 3. ‘I agree with everything you say but you haven’t done much to help Remploy workers?’

Which gives O’Grady the chance to say that Unions are not as powerful as they should be because of oppressive government anti-union legislation (which allows them to kick disabled workers onto the scrapheap.)and that this needs to be repealed and for more people to join the Unions. All in all hardly a balanced or very informative piece being purely from O’Grady’s point of view.

Remarkable that Derbyshire is so unwilling to ask any difficult questions or demand any actual answers to ones she does ask. An obvious question is why should the Unions have any political clout at all in a democracy? Why can a Union Baron, or Baroness, take his membership for granted along with ‘their’ money and hand it all over to a political party. Where is the democracy in what is essentially mob rule?….and that’s assuming that the 6.5 million union members actually support Labour or the policies the unions want to be implemented…which I doubt severely….At least half must be Sun readers.

No such questions from Derbyshire…..the whole show was basically turned over to O’Grady and quite probably broke every rule in the BBC Charter.

13 Responses to Joy Through Striking!