Let’s Have A Good Clean Fight

‘Today’ (0850) finished with a bit of barefaced cheek, or complete idiocy, having decided to discuss Osborne’s sparring with Balls in the Commons.

The complaint was that surely the politicians should all be getting together to work out how to deal with the recession rather than engaging in a political bunfight, point scoring off each other. 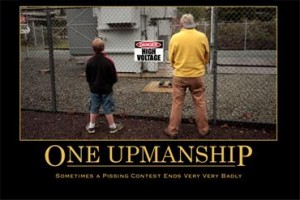 Well perhaps…but then how does ‘Today’, Britain’s premier political bunfight programme in its own right,  justify spending 10 minutes talking about the bunfight instead of ‘Plan B’ or whichever Grand Economic Plan we’re going for now?

If it’s all about ‘the economy stupid’ why spend any time at all on Today talking about this….consider that they spent only 8 minutes talking about Social Care. 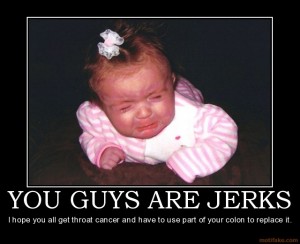 The sheer nonsense that was spoken  detracted from any usefulness that might possibly have been squeezed out of such a subject…. The Times’ Rachel Sylvester providing the comedy….arguing that we need more politeness and good manners to facilitate a reasoned debate…she then went off on one saying everybody, politicians and media, were all ‘Jerks’.

I would suggest part of the problem is a programme like ‘Today’ in which there is a very limited time given to each story regardless of significance and during that time a good portion is Humphrys and Co hamming it up enjoying the sound of their own voices with never ending questions and interruptions leaving politicians (Tories usually) with little time to say anything other than quick soundbites and digs at the Opposition.

So fewer, longer, more in depth reports with concise questions and time to give considered answers….and opposing views.

It is not the first time that Today seems to use an item to attack a particular target.

On Thursday Bob Diamond, Barclay’s ex boss, was turned over by the programme ostensibly discussing why during the Treasury Select Committee he called the questioners by their first names.

Oddly the Committee calling him ‘Mr Diamond’ was showing their contempt for him…. as he was, according to Frank Dobson, a ‘thieving banker’.

When you  think that financial services provide the backbone to our nations finances you might think some of these politicians and media stars…whom we know are paragons of virtue themselves, would hold back on the highly inflammatory language that is designed to trash the City’s reputation.

When the credit rating agencies downgraded Barclays you would hope that would have opened their eyes a bit…no good cutting off your nose to spite your face.

Undoubtedly bankers need to row back on the riskier behaviour and become less venal…however we need banks…no banks, no mortgages, no pensions, no revenue stream for government, no NHS, no schools, no welfare..etc

Funny how I don’t remember Dobson shouting ‘thieving bankers’ when Labour’s coffers were overflowing with banker’s loot….or the BBC investigating Libor in 2007-08 when the scandal was being reported in the Press.

40 Responses to Let’s Have A Good Clean Fight