‘One lesson well understood in both Stalin’s Russia and Nazi Germany was that propaganda is most effective when it is backed by terror.’

In Britain today there are over two million National Socialists living mainly in large enclaves separate from the rest of British society. 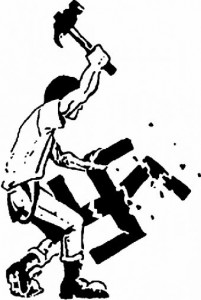 Their lives are guided by the tenets taken from a book that orders them not to make friends with anyone who is not a National Socialist, in fact it instructs them to either kill non-followers or force to submit to slavery those who do not convert to their ideology…the book states that it is their duty to spread the ideology and one day to enforce it upon all.

The book praises the ‘family’ and women but ideally would prefer women to be kept at home as housewives…respected but different from men in authority and ability to run their own lives.

The book imposes severe and draconian punishments upon those who commit the ‘crime’ of adultery amongst others.

At times impatient ‘hotheads’ will strike out at the non National Socialist community and government using extreme violence in order to raise awareness and terrorise the Establishment into appeasing them…the Establishment ‘recognises’ their grievances and hands out money and positions of influence in order to ‘assure’ the minority that ‘they’ are part of the national concern.

The National Socialists use this influence and the undertow of  threat to continue to press for even more concessions towards their ideology and thus successfully subvert the established community by forcing them to slowly adopt, bit by bit, their National Socialist values…..such as dietary requirements, clothing and the compulsory learning of their ideology in schools…and all supported by a public service broadcaster which is worried that to be critical of the ideology would only antagonise the National Socialists and lead to anger, fear and violence from that community and possibly between communities.

Therefore in order to ‘keep the peace’ nothing will be said about an ideology that is at heart violent, racist and oppressive….nor the fact that it is spreading at an alarming rate.

The public broadcaster cannot ask the question ‘What will be the consequences to this country if the National Socialist community is allowed to grow and force its ideology upon an ever greater swathe of the country?’

It cannot ask the question because the answer would be terrifying for all who value democracy, liberty, and peace.

Would the BBC throw Mein Kampf …

……”the new Koran of faith and war: turgid, verbose, shapeless, but pregnant with its message.”

Mark Thompson, the BBC’s director-general, says it will not screen the controversial ‘Can We Talk About This?’.

‘In the past, Thompson has conceded that there is “a growing nervousness about discussion about Islam”. He claimed that because Muslims were a religious minority in Britain, and also often from ethnic minorities, their faith should be given different coverage to that of more established groups.’