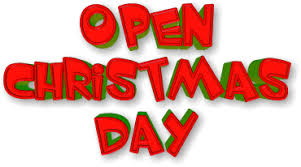 We’re open every day, 365 a year, so detail any bias you spot over the Christmas holiday here!