As I pointed out in the comments yesterday, the BBC’s Matt Danzico has been touting for book donations for a new Occupy Wall Street library organised by his sister Liz (aka “bobulate”):

(Liz sounds like she could be one of Occupy’s Uptown crowd.)

Even *ahem* impartial BBC journalists such as Matt Danzico might think twice about giving stuff to OWS when they hear of the money swilling around the place. 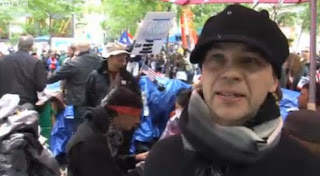 Caristo was also interviewed on BBC Radio 4’s Today programme following the clearance of Zuccotti last week; he told Evan Davis that the occupiers’ next move would be a takeover of Central Park.

It turns out Mr Caristo is a bit of a divisive character within the OWS set-up. According to audio-plus-transcript posted today by OWSNYC at Livestream (recorded secretly by other occupiers, it seems) he has been taking substantial amounts of money from a rich benefactor called Jean Louis Bourgeois (no, seriously). Here are some screengrabs to give you an idea of the sums being discussed, not to mention a somewhat two-faced attitude towards the guy with the money:

The Livestream clip linked to above is worth watching in its entirety to get a full sense of the bitterness, backstabbing and bitching that’s going down within OWS. There’s talk of chauffeur-driven cars, alienated celebrities, and even a threat to kick someone in the teeth. And if you’re really into the soap opera of it all, you can see one of Thorin’s former friends responding here.

You don’t get any of this stuff on the BBC, do you?