From Laura Trevelyan’s “At the scene” report:

Daniel Klein shows me his bruised face and his broken ribs – a casualty, he said, of last night’s eviction of Zuccotti Park by the NYPD. Daniel is back, and intends to stay in the park overnight, somehow – though he can’t sleep here.

She’s put his picture on Twitter (although there she calls him Daniel Maslwosky, but it’s definitely the same guy and Danny Cline appears to be the name he usually goes by): 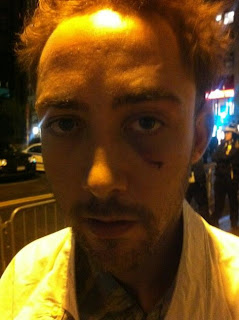 My first thought on seeing that was, “He looks familiar.” Remember this video I posted back on October 6?

Yup, same guy. Here’s a collection of more outbursts by Danny, aka “The Lotion Man”:

Even if one takes the claims of injury at face value (which I don’t – unlike Trevelyan) it’s not too difficult to imagine how this nasty piece of work might have ended up getting hurt during the course of the eviction.

Given that the BBC has been doing its utmost to portray the Occupy movement in as positive a light as possible, it’s wonderfully ironic that Laura Trevelyan should choose this angry racist little weasel as a symbol of OWS defiance.

UPDATE. This recently posted video suggests that Danny has indulged in one petulant outburst too many. “I got angry and threw my piece of artwork on the floor by mistake… You want me to leave the park? I’ll never come back, and this place will be deserted…” “OK, now collect your gear.”