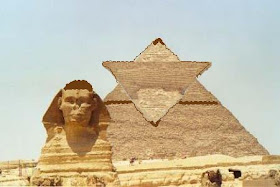 Do you remember the story about the Pyramids being closed on 11.11.11? Must admit I just glanced at it but turns out that even when the BBC reports seemingly innocuous stuff, it ain’t necessarily so. So…from the BBC report;

“Egypt has closed the Great Pyramid outside Cairo after rumours that groups would try to hold special rituals on 11 November at 11:11. The rumours sparked an internet campaign to stop any ceremonies. However the head of Egypt’s antiquities authority said the pyramid had been closed until Saturday morning for “necessary maintenance” only. The Great Pyramid houses the ancient tomb of the Pharaoh Khufu. Two nearby pyramids and the Sphinx remained open.”

But what were “the rumours” and “special rituals” and which group was alleged to be preparing to commit them?

“Egyptian media reported that some Egyptians feared that the event would be used by Jewish Masons to reclaim the Pyramids as ancient Hebrew structures, denying Egyptians their claim to the pharaonic monuments. One SCA employee claimed that a crew of 1,200 Jews were planning to attend the event, crowning the mightiest of the three structures with a Star of David in order to assert the claim that Jewish laves built the pyramids, and not the ancient Egyptians, Egyptian daily Al Ahram reported. Former SCA Secretary General Abdel Halim Noureddin told Al Ahram Jewish Masons have been trying to cap the Great Pyramid since 1931 with the Jewish emblem, so this instance should not be surprising.”

So, vile anti-semitic rumour mongering from the newly liberated Egyptians. And the BBC fails to share the details? I am indebted to B-BBC reader Martin for pointing out the amazing sanitising on behalf of the Jew haters in Egypt.