On Monday David Preiser contrasted the way the BBC reported the Tea Party movement (“a bit strong for our tastes” as R5L’s Peter Allen put it) with the sanitised PR effort it is producing on behalf of Occupy Wall Street. David headlined his piece: “The BBC Loves Left Wing Protest“. No kidding – check out Paul Mason’s tweets of encouragement to the New Statesman’s lefty activist Laurie Penny: 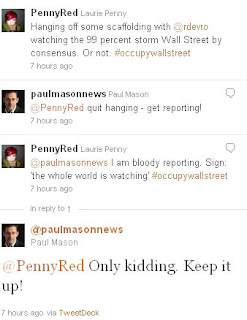 Here are the sort of characters from the Wall Street protest you won’t see on the BBC’s coverage.

The anti-Semitic college graduate. “Why are you fighting with us? Because you got the money, Jewish man… You can’t even speak English. Are you Israeli? Go back to Israel.”

The angry anti-white know-it-all hippie. “Maybe if we don’t use currency any more, like, that’d be really awesome. Maybe if there’s no currency a lot of products that don’t need to exist wouldn’t exist.”

Imagine the reaction the BBC would have had to such dickheads spouting equivalent bile and idiocy at a Tea Party rally. There would have been a determined effort to portray them as representative of the whole movement. But as we all know, lefty protest movements get rose-tinted BBC coverage.

UPDATE. More video of angry anti-white know-it-all hippie. “Are you a white man? If you’re a white man then shut the fuck up about race because you don’t know shit other than how to rape and kill.”