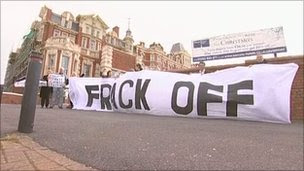 Put out the bunting and crack open the champagne. It’s still early days, but Cuadrilla Resources, a small but highly enterprising UK company that is surveying for shale gas, has announced that it has found a field under the UK with over 200 trillion cubic feet of gas…one of the largest in the world and enough to create 5,600 jobs.

But for the BBC, of course, there’s no celebration. It’s just an excuse for its eco-warrior reporters to marshall a barage of objections and to recycle the same tired propaganda about the dangers of fossil fuels. They are an essential part of the deadly serious greenie camapign to get frakking banned and condemn the UK to escalating fuel poverty. So twisted is their reporting that a demo mounted by a man, a dog and a paint pot outside the Imperial Hotel in Blackpool is given more importance than 5,600 new jobs.

Already, the BBC and its greenie chums have forced Cuadrilla to halt drilling,and they are awaiting for the results of an inquiry to be given the all clear. It defies belief that we are mired in such regulatory miasma – these loonies, if they had been around in the industrial revolution, would have stopped everything from coal mining to iron smelting, and we would all still be pox-ridden yokels with a life expectancy of no more than 30. Cuadrilla’s response? Well, if the UK heeds the poisonous lies like those peddled by the BBC, they will be off to Poland. And who would blame them?

17 Responses to FRAKKING OFF