Apologies for the lengthy title, but there are two issues here which need to be covered, and I’m combining them into one post. First, the BBC’s continued attempts to lie and rewrite history.

Most people here will know exactly what’s coming, and I know this has been covered here many times before, but it’s even more important to call the BBC out on it now because of the looming UN fight over creating a State of Palestine. For the benefit of those who don’t know the BBC’s bias about the “West Bank”, here’s the map they use to explain history to the public:

Notice on the left, the BBC is claiming that there was such a thing as the West Bank (i.e. Palestinian) Territory before the 1967 war. They’ve just erased a chunk of Jordan from history. As we all know, that was part of Jordan at the time, a country at war with Israel. Why else would Israel have invaded? This map indoctrinates the public with PLO propaganda, that Israel invaded sovereign Palestinian territory. Your license fee is being used to promote false history and anti-Israel propaganda.

Reality, on the other hand, is not Israeli propaganda. This map of Jordan – from a non-partisan source – and environs showing the borders during part of the 1967 war in question is fact, not fiction: 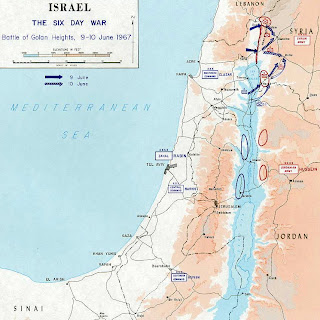 Notice the clear border lines of Jordan encompass the area about which the BBC is lying. Yes, I am accusing BBC News Online of telling a lie. I don’t care what some Beeboids personally believe about nasty old Israel’s land grab or the plight of the poor Palestinians or anything else. This is historical fact, and the BBC is lying about it. How can there be an honest Q&A about the topic when one of the answers is a lie? Until they remove that first map and replace it with an honest one, my accusation will stand.

Needless to say, this propaganda demonizes Israel in the minds of the public. Most people are seriously uninformed about the facts of Israel and 1967 and the “Palestinian Territories”. When one tries to explain the facts to get past the emotions, one is then accused of spouting Israeli propaganda. This is how the BBC’s editorial policy and style guide is blatantly biased, causing them to demonize Israel at every opportunity, although the BBC disputes this.

It’s impossible to have a civil discussion, national or otherwise, about the situation when the national broadcaster promotes propaganda for one side and demonizes the other. This then promotes anti-Jewish sentiment, but that’s a topic for another time.

Now for the BBC Censorship angle. Last week, Maen Rashid Areikat, the Palestinian ambassador to the US, said that there should be no Jews in a State of Palestine:

“Well, I personally still believe that as a first step we need to be totally separated, and we can contemplate these issues in the future,” he said when asked by The Daily Caller if he could imagine a Jew being elected mayor of the Palestinian city of Ramallah in a future independent Palestinian state. “But after the experience of 44 years of military occupation and all the conflict and friction, I think it will be in the best interests of the two peoples to be separated first.”

Almost no notice was taken of another pre talks decision that the PA chairman revealed, as he announced clearly that if a Palestinian Authority state is created in Judea and Samaria, no Israeli citizen will be allowed to set foot inside.The PA chairman also stated that he would block any Jewish soldiers from serving with an international force stationed on PA-controlled land.

“I will never allow a single Israeli to live among us on Palestinian land,” Abbas declared.

Judenfrei, Judenrein. And the BBC has steadfastly censored all of this. Justin Webb didn’t bring it up to the feckless Lord Levy on Today, it doesn’t feature in any BBC News Online report about Israel or the Palestinians, and it hasn’t been mentioned anywhere else on the BBC. If someone can show me one single example of it, I’ll post it here, shocked but grateful.

Without the truth and all the facts, it’s impossible to have a rational debate and reasonable understanding of the situation. Yet the BBC actively prevents that, promoting propaganda for one side, rewrites history, and censors the Palestinians’ desire for ethnic cleansing.

ADDENDUM: Here’s Katty Kay interviewing US Ambassador to the UN, Susan Rice, in which Katty states uncategorically that only Bibi Netanyahu is the problem, and Amb. Rice corrects here. No surprise that this is Katty’s belief as she recently tweeted to her followers that this New York Magazine article – which blames Netanyahu and uncritical, “steadfast” support for Israel in the US Congress as the only obstacles to peace – is “All you need to know about the frosty relationship between Barack and Bibi.”

Why, it’s almost as if there’s a groupthink on this issue extending across the spectrum of the BBC.