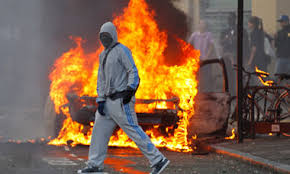 The Telegraph highlights the behaviour of the BBC during the London rioting and focuses on the Corporation’s use of the term “protesters” to describe the feral scum infesting our streets.

“Two days after a peaceful protest over the death of suspected gangster Mark Duggan in Tottenham ended, the corporation was still using the term to describe violent looters. That was despite the fact that hundreds of youths, with no connection to events in Tottenham, had since run riot across the capital.

Theresa May, the Home Secretary, Boris Johnson, the Mayor of London, and police have all condemned the youths as “criminals” whose behaviour is “utterly appalling”. Yet senior BBC presenters and reporters on the ground yesterday continued to describe those behind the violence as “protesters”. The move sparked a wave of anger from members of the public on Twitter. Duncan Barkes wrote on the micro-blogging website: “Hello BBC. They are not protesters, are they? Rioters better description. I mean, what’s the cause for the protest?”

More linguistic support for violence, plus ca change? I mean, they call terrorists “militants” so can we be that shocked that they see mass thuggery as protest?