Newsnight gave the pie-thrower the briefest of mentions last night:

“There was an attack by a member of the public… A man was led away in handcuffs.”

A bit coy about identifying him there.

In January Newsnight commissioned a film – UK Uncut in their own words. Look who had the starring role: 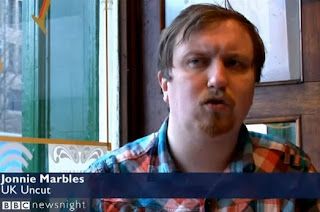 I wonder why they didn’t mention that.