Is the BBC trying to mastermind the attack on Murdoch? Here’s the assistant editor of The Independent Ian Burrell a short while ago (h/t MySiteC2E in the comments):

Fishing around for a “safety in numbers” line of attack, perhaps?

And as an update to my earlier post about the BBC and Guardian combining forces, the BBC’s Kevin Bakhurst has explained how they are able to claim the Gordon Brown interview as an exclusive when the Guardian’s Nick Davies says it was “an interview with the BBC and the Guardian”: 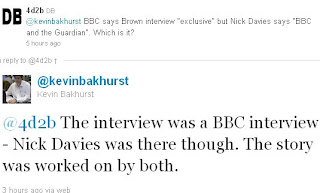 Hope that clears things up. No? Well, for the time being perhaps it’s best we all just assume that the BBC and the Guardian are one entity.