No, not THAT one! I mean Mohammed el Baradei. Did you catch this interview with this snake oil salesman this morning. As he points out, he doesn’t hate America, just its policies. He doesn’t hate Israel, he just wants equality for Palestinians. Lovely guy and a nice reception from the BBC.

Nice to see the BBC giving yet another “Thought for the Day” Slot to Abdal Hakim Murad, Muslim chaplain at the University of Cambridge. Abdal gets a lot of platforms which is curious given the tiny % of the UK population Islam constitutes. Then again, remind me who is head of BBC “Religious Programming”? No Bias here for sure.

Can state assassinations be justified?

US President George Bush has told the CIA to find and destroy Osama bin Laden and his al Qaeda terrorist network.

The president has given the agency the green light to do “whatever is necessary” – which could include an assassination attempt – and has given it £700 million in funding to carry out the mission.

The operation will include the CIA working with commandos and other military units to act immediately on intelligence uncovered by American spies about enemy targets.

Should the CIA have been given the go ahead to assassinate Bin Laden? Can such actions ever be justified?

BBC News website readers in Pakistan and Afghanistan have been sharing their views on the death of al-Qaeda’s founder and leader, Osama Bin Laden.

Osama Bin Laden evaded the forces of the US and its allies for almost a decade, despite a $25m bounty on his head.

UPDATE May 3: Der Spiegel asks the question the BBC has curiously stopped asking:

And so we wake up this morning to news that Osama bin Laden is dead. Countless trees will die as newspapers bring us details and analysis but the BBCs instant reaction has been interesting – especially as they’ve had 9 years, 7 months and 21 days to prepare.

The BBC has a rolling obituary which better suits a head of state or great friend of the world which is…typical. Take this sentence as an example:

“‘To his supporters, Bin Laden was a fighter for freedom against the US and Israel, not, as he was to many in the West, a terrorist with the blood of thousands of people on his hands.‘”

One clip ends with the statement that ‘his ideas live on‘ solemnly intoned over a photograph of him smiling into the camera like a happy, bearded uncle. 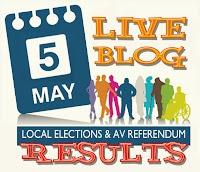 As usual on Thursday we’ll be bringing you the Question Time LiveChat session. But as it’s also Local Election results night we’re going to extend the chat to cover that as well.

So we’ll start at 10:30pm as usual and finish up whenever the last wibbling drunk can’t type any longer.

The AV Referendum count won’t be happening until the next day because they haven’t yet bought the voting machines that the utterly dishonest Electoral Reform Society claim not to be selling. But there will still be plenty of AV uninformed speculation and pointless rehashing of lies for us to pick over like the dregs of a goat curry.

As we’re covering the elections, we’ll be spreading the chat live across Biased-BBC, AllSeeingEye, MaxFarquar and a few others to be finalised. Thanks go to Max for the excellent logo designed for the night.

At some time during the night we should be celebrating our very own David Vance‘s election as a NI Assembly member so keep the champagne chilled for that moment.

See you all here on Thursday night…

1ST May – be still my beating heart. Yes, it’s International Worker’s Day and I am sure our comrades in the BBC are celebrating. Want to share in their celebrations? Share it HERE…

This brought to my attention;


“The BBC excelled here onthe Today programme this morning bringing in a commentator that they must knowis a Hamas and Hizbollah apologist and champion of the Islamist cause.

Alastair Crooke, the one time MI6 spymaster who converted to Islamism and isnow director of the pro-Hizbollah outfit called Conflicts Forum and who proudlyboasts that it is “Listening to political Islam, recognisingresistance….Conflicts Forum wants to challenge the prevailing westernorthodoxy that perceives Islamism as an ideology that is hostile to the agendafor global democracy and good governance.”

Crooke believes Islamist terrorists are not in fact terrorists but resistersand freedom fighters.

Why would the BBC think that he was the right man to ask to comment on theevents in Syria when 2 weeks ago he quite clearly stated that he supported theSyrian government’s position……and funnily enough this is what he didtoday…stating that the protestors were just a small group of Salafists andalienated exiles and it was their propaganda that was exaggerating the deathtoll of civilians. In fact he said, it was the police who were being killed inlarge numbers and only a few demonstrators…..the Syrian people do not want UNintervention and do not want peace with Israel.


But then why would the BBC have on Mark Thomas to tell usthat the real purpose of the Israeli security barrier was to steal Palestinianland and water…a land grab….and of the ‘incredibly brutalising effect’ofhaving to go through check points….’The Israeli occupation is creating amortal sin.’ and that the Israelis were running a campaign to ‘cleanse’ an areaof Palestinians….and then John McCarthy who told us…’Palestinian lives arefractured by check points and deliberately so……every one traumatised bythese horrible walls and barriers that are put up.’

So traumatised in fact that the Palestinians have to resort to running literaryfestivals in the West Bank to cope…which was the reason for McCarthy to gothere. Life is hard….and the check points are mostly run by, er, thePalestinian Authority not the IDF!”

Rejoice – immigration is driving our economic growth. Or so it is alleged in this report on the ever reliable BBC.

“Immigrants from eastern Europe have added almost £5bn to Britain’s economy since 2004, according to a new report. The National Institute for Economic and Social Research says 700,000 people moved to the UK after their former communist homelands joined the EU. It believes they drove up British GDP by 0.38% in the years to 2009, the equivalent of £4.91bn.”

If only we had allowed even more to come in – just think of the rich economic benefits we could have enjoyed. Thank goodness for the totally impartial NIESR and the BBC for sharing this good news.

Strident eco-camapigner Sarah Mukherjee may have left the BBC, but Richard Black is carrying on her propaganda work, even over the holiday weekend. Here’s his latest offering – a largely uncritical re-cycling of a paper paid for by taxpayers’ money – that purports to show that 250 people living in the Himlayas somehow know the truth about global warming.

I was taught years ago – during my training as a journalist – that if you ask ten people about the weather, you get at least twenty different stories. But no matter, this is a cutting edge investigation by our top minds into our future, so anything goes.

The background to this nonsense, of course, is that the IPCC was caught making hugely exaggerated claims about the impact of climate change on the Himalayas. They alleged that glaciers were melting so fast that they would be gone in a matter of decades, putting the millions who depend on their annual release of meltwater in peril of drought.

Unabashed, and incapable of accepting that they were wrong, the Royal Society (grant from the UK taxpayer last year £46m) sanctioned two climate change zealots from the US – including a prominent member of one of India’s main greenie think-tanks – to ask the local farmers what they thought was going on. Rubbish in, rubbish out. I am not aware how it could possibly be imagined that a sample so small from a tiny micro-area of the Himalayas (most of whom have probably already been bombarded with climate change propaganda) could remotely have a meaningful or reliable grasp of the huge mixture of forces involved. I concede that it could be interesting sociology and testimony to human suggestibility – but reliable data about climate variability? What utter tosh.

That said, climate zealots increasingly believe that scientific truth is based on “consensus”, so perhaps this fits the new methodology. Let’s in future decide scientific validity on the basis of opinion polls.

In that vein, the farmers told the “researchers” that it’s getting warmer and drier, there are more mosquitoes and the glaciers are definitely melting more. So it’s been published and pushed round the world as a valid piece of climate change investigation, and evidence that despite the IPCC cock-up there is still much to be alarmed about.

And Richard Black has faithfully recycled it. You can tell by his tone that he knows that the so-called research has all the validity of the claims of a three-card-trick huckster, but hey-ho, this is climate activism, it’s been sanctioned by the Royal Society, and this is BBC science reporting, so it must be true, and it deserves bank holiday weekend prominence.