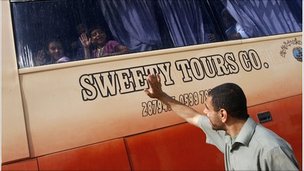 The BBC seem pretty euphoric about the decision by the Egyptian military to open the Rafah crossing into Gaza. Naturally this is presented as the most benign and enlightened decision one could imagine. Israeli concerns are mentioned but presented as more begrudgery, in true BBC fashion. The fact that Hamas can now get much needed armaments more easily is dismissed as a mere detail as we are all asked to join in BBC praise for the alleged Arab Spring. I heard James Naughtie on Today this morning waxing lyrical about the new Egypt. No mentions of the gang rape of Lara Logan in Freedom Square, no mention of the emerging Nazi Party, no mention of the looming triumph of the Muslim Brotherhood. A secular-ish Egypt is morphing into a new Iran and the BBC can see nothing wrong in that – after all – if you hate Israel you can’t be all that bad, right?